Zao is a metalcore band that began out of Parkersburg, West Virginia in the United States. The band began in 1993, and have gone on and off since. The band has been a part of Steadfast Records, Solid State Records, and Ferret Music before forming their own label, Observed/Observer.

The band has struggled through several lineup changes, with members Daniel Weydant, Scott Mellinger, and Russ Cogdell have been a part of the lineup for a long period of time that they are considered by several fans as the "core" of the band.

Zao began in March 2003.[1] The band was formed by Eric Reeder on Vocals and Mic Cox on Bass, with Roy Goudy joining a few days later. The band hired a drummer, who did not show up to their practice space, which was at Jesse Smith's basement. Smith would take up the position of Drummer and the band was set. The band would start calling their style, "Christ-Centered hardcore", similar to the "Spirit-Filled hardcore" movement, they sought to reach an audience that had been pushed away from the organized church.[2]

In 1994, the band recorded their first demo, Author. In 1995, Reeder departed from the band. The band then hired Shawn Jonas as their new Vocalist and that year, the band recorded an EP and another demo, Sustained and The Tie That Binds. The Tie That Binds was a split EP alongside Outcast. At this time, the band had signed with Steadfast Records, a label run by Matt Traxler of Six Feet Deep.[3] Once they had signed with the label, the band entered the studio with Ben Schigel (Switched, Rikets, Chimara) and recorded All Else Failed in four days.[1] The four band members would then sign with Tooth & Nail Records and Solid State Records and release their sophomore album, The Splinter Shards the Birth of Separation. Around the time of this release, Cox departed from the band and was replaced by Kevin Moran and Ron Gray took on Rhythm Guitars. Once the two joined on, the band continued on for a brief time. Following Cornerstone Festival 1997, all the band members departed, save for Smith.[4]

By this time, Goudy had already expressed interest in departing, so Smith had asked Brett Detar (ex-Pensive) to come in and try out.[1] Once the lineup departed, Detar came on as their new Lead Guitarist. Detar recruited Daniel Weydant, who was the Backing Vocalist and Bassist for Seasons in the Field. Weydant agreed to join, only if Russ Cogdell could join as well.[1] Smith and Detar agreed to the terms and the two joined the band. The band members would then record the band's seminal record, Where Blood & Fire Bring Rest, which came out in 1998 through Solid State Records and the lineup of Smith on Drums, Cogdell and Detar on Guitars and Bass, and Weydant on Vocals. The four went on without a live Bassist, performing live throughout the States.

However, the following year, in 1999, Detar departed from the band and was replaced by Scott Mellinger on Lead Guitars and Rob Horner on Bass. With the two new members, the band recorded Liberate Te Ex Inferis, which was very well received. The new lineup took to the road many times before Cogdell departed from the band. Weydant departed from the lineup as well. During this time, Corey Darst and Matt Auxier took over Vocals and Guitars respectively. In 2001, the band unofficially broke-up.

In 2001, Mellinger and Smith wrote and recorded two different albums, (Self-Titled) and Parade of Chaos. The two sent the tracks to Weydant and he performed Vocals in the studio. The band released (Self-Titled) in 2001 and Parade of Chaos in 2002. In 2003, the label required the band to re-record All Else Failed. Despite complaints from the band, they complied and recorded it.[1] During some tour dates in 2003, Smith was unable to be located, which led to the band hiring Lance Garvin of Living Sacrifice and Soul Embraced on Drums to fill-in, while Weydant had again quit. Joshua Ashworth of Society's Finest took over the position for the time. At this time, the band Smith signed a deal with a new label to release a new record, as their contract with Solid State was up. However, no music was recorded before the label fell apart. Smith then reached out to Ferret Music and signed a two-album deal with the band.

Ashworth, Smith, Horner, and Mellinger performed until Smith and Horner departed from the band, while Ashworth was let go, as Weydant returned once more.[1] Weydant, Mellinger, and a returning Cogdell, hired on new Bassist and new Drummer Shawn Koschick and Sean Peck.[1] Smith's departure had been coming for a long time, due to a long growing loathing for himself, as well as a disdain for the label and the band's music. Horner's departure, however, was not covered nearly as well.

The two departing members went on to perform in a new band called Gods, alongside Moran, the band's former Bassist. Once the two departed and Weydant had returned, the three remaining members hired on the Jade Meridian rhythm section, a band that had consisted of Mellinger, Cogdell, Peck, and Koschick, and they continued onwards.[5] The band went to record their newest album, The Funeral of God, which marked the first album that was "not really a Christian" album. The album was also their first release through Ferret Music.[6]

The album was well received through many sites.[6][7][8][9][10] The next year, Koschick departed from the band, despite stating he would finish out the Praise the War Machine tour, where longtime friend and tour manager Martin Lunn took over the Bass position, joining during the City of Champions tour with The Juliana Theory. Peck, who had been a member only briefly, announced his departure about three weeks before an out-of-country tour with Bleeding Through, leading Weydant to reach out to Jeff Gretz, a friend of the bands'.[11] Gretz never officially joined the band, according to him.[11] In 2005, the band released their debut DVD, which featured interviews with all current members, former members Roy Goudy, Shawn Jonas, Jesse Smith, Brett Detar, and Stephen Peck, as well as friends Ryan Clark (Demon Hunter, Training for Utopia, Focal Point), Don Clark (Demon Hunter, Training for Utopia), Bruce Fitzhugh (Living Sacrifice), and notable fans Chris McLane (Stretch Arm Strong), CJ Anderson (Sinai Beach), and Jimmy Ryan (Haste the Day).[1]

The band entered the studio, in January 2006, to record their ninth studio album, The Fear Is What Keeps Us Here, with Steve Albini, who had produced Nirvana and Neurosis.[11][12] However, due to a surgery that was already scheduled, Cogdell was unavailable to attend the recording process.[13] The four remaining members went in and recorded the album quickly, most of it recorded live, save for leads and vocals.[11][12] Following the recording, the band embarked on a tour with In Flames, Trivium, and Devildriver, and following that tour, the band co-headlined their second Ferret Music Tour.

However, during that tour Weydant severely injured his hand, which resulted in them dropping off the tour.[14][15] The band would release the album, while on tour with Demon Hunter. The fall of 2006 toured with Evergreen Terrace, Throwdown, and Maylene and the Sons of Disaster and following the tour Mellinger and Weydant discussed a long term break after the hiatus.[11] In hopes to continue touring, Gretz departed from the band and soon thereafter joined From Autumn to Ashes.[11]

On January 23, 2007, the band officially announced the return of Cogdell and that Josh Walters (The Juliana Theory) would fill-in the drum position whenever the band returned next. Following the statement, Walters was recanted to perform with the band[16] and that Dean Minerva, a friend of the band's, would perform with them. In mid-2008, the band performed their first show since 2006 with Demon Hunter and the lineup of Weydant, Mellinger, Lunn, and Gretz, with Cogdell not returning. Following the band's return, they entered the studio and recorded with Tim Lambesis of As I Lay Dying and Daniel Castleton.

On May 5, 2009, Zao released their tenth album, Awake?, which was released on Ferret Music. However, the album was only released through Ferret, due to a lack of another outlet. There were no prior plans to release it through them initially. The album was co-produced by Lambesis, Castleton, and Mellinger. Cogdell returned once more in 2010. However, once his return occurred, not much more with the band happened, save for the loss of the band's URL at the time, stating they would create a new site, but this never occurred.

On July 11, 2014, the band went into the studio, following their five-year unofficial hiatus and working on side projects Lonely//Ghost//Parade and Young Fox, and began tracking their 11th release.[17] On July 10, 2015, a year later, the band released their debut EP, Xenophobe, independently. The band members consisted of Weydant, Mellinger, Cogdell, Lunn, and Gretz. Following the release of the EP, the band announced a follow-up full-length, titled The Well-Intentioned Virus. The band discussed on the As The Story Grows Podcast about the tracks of the release, and the lyrical background for the songs.[18][19]

The band mentioned that they had recorded a lot of extra material that did not end up on the album, releasing a flexi-disc through Decibel Magazine, titled "Drifting Shadows in Walking Dreams".[20] On November 3, 2017, the band released Pyrrhic Victory, which featured five songs that did not appear on The Well-Intentioned Virus, including "Drifting Shadows in Walking Dreams".[21] During an interview with Travis Turner (ex-Aletheian, ex-Solamors, ex-Becoming the Archetype), Gretz revealed that the band had been working on new material, which was later confirmed by the band themselves, working on a new album.[22][23][24] On September 21, 2018, the band released a song on a split 7", called "Hide from the Light", which was included on the split with Yashira.[25] The band is set to release a new album in 2019.[22] 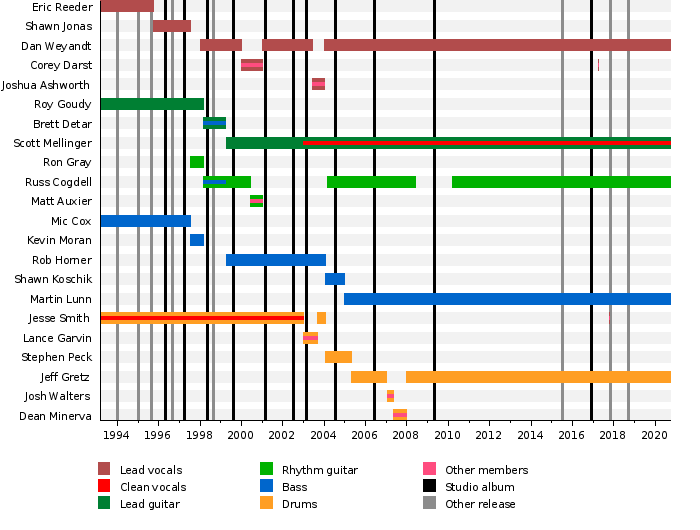 Retrieved from "https://christian-metal.fandom.com/wiki/Zao?oldid=2887"
Community content is available under CC-BY-SA unless otherwise noted.