xDeathstarx (pronounced as Deathstar) was a metalcore/hardcore band that began in 2002. The band formed out of the Redlands in California. The band had several lineups, with the Gregson brothers primarily at their core. The band, along their Christian values, had a straight edge lyrical theme, which entailed not drinking alcohol and not using drugs.

xDeathstarx began in 2002 with the lineup of Eric and Ryan Gregson on Vocals/Bass and Guitars. Tommy Green (Vocals), Josh Highland (Vocals) and BJ Hammell (Guitars) were also apart of the lineup.[1][2] In 2003, the band recorded an EP titled Beware of the xDEATHSTARx.[3]

In 2004, the band added Kevin "Kevvy-D" Davis on Bass and Mike Dunlap (Sinai Beach) on Drums. However, Dunlap was quickly replaced by Daniel Myerscough.[4] The band recorded The Triumph, with Dunlap playing on a three tracks and Myerscough the remainder. Shortly after, the band recorded Reverse, a split EP with the Suffocate Faster.[5] In 2006, the band signed to Facedown Records.[6] Green and Hammell had departed from the band, being replaced by J.R. Bermuda, Corey Johnson and Manny Contreras taking over Bass, while Davis switched to vocals.[2] In 2006, the band embarked on tour with Anam Cara and Blood Stands Still, however, mid-way through, the tour was cancelled, as Anam Cara officially disbanded.[7]

In 2007, more lineup changes occurred. Ryan Nelson, known also as "The Dawg" or "Force", joined as guitarist. Contreras departed being replaced by Matt Boughton as bassist. After Myerscough departed, however, the band went through two additional drummers - Nick Smith and Travis Boyd - before eventually settling on Isaac Bueno.[2] The band recorded an album, titled We Are the Threat, which came out through Facedown Records.

Over the year, the band embarked on two tours - one with Emmure and Means,[8] with a mini-tour with Parkway Drive.[9] In 2008, Facedown re-released The Triumph. The band disbanded in 2009. The band parted ways as they felt they were being called in different directions and they were still friends.[10]

In 2015, the band reunited with the lineup of Eric Gregson on Vocals, J.R. Bermuda on Vocals, Tommy Green on Vocals, Jason Keller on Guitars, Ryan Gregson on Guitars, Josh Highland on Guitars, Nick Piunno (Winds of Plague) on Guitars, Matt Boughton on Bass and Brandon "B-Town" Trahan (Impending Doom) on Drums.[11] The band released a single titled "Generation" via Facedown Records and performed a few shows, including Facedown Fest 2015.[12] The band has no future releases planned as of 2016, signifying they are no longer around.[13] 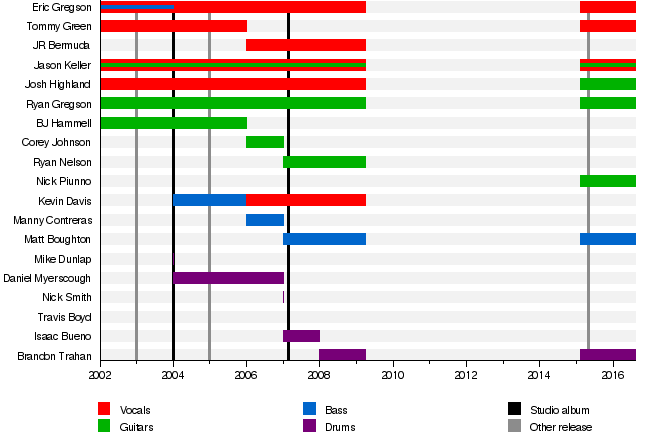