War of Ages is a metalcore band that originated in Erie, Pennsylvania in the United States. The band originated as a Point Zero in 2002, before changing their name to War of Ages in 2005.

The band began in 2002 as Point Zero, with the lineup of Leroy Hemp on Vocals, Steve Brown on Lead Guitars, Matt Moore on Rhythm Guitars, Nate Owensby on Bass, and Rob Kerner on Drums. In 2004, the band recorded and released an independent EP, titled Unite Us All. Around this time, Moore departed from the lineup, being replaced by Kang Garnic.

By 2005, the band changed their name to War of Ages, as well as encountering lineup changes, with Garnic, Owensby, and Kerner departing and replaced by Luke Johnathan Lynch, T.J. Alford, and Alex Hemp respectively. Following the changes, the band recorded their self-titled debut album, which was released through Strike First Records, a subsidiary of Facedown Records.

Over the next two years, the band would officially join Facedown's roster, record and release two albums - Pride of the Wicked and Fire From the Tomb - and saw the departure of Lynch. Branon Bernartowicz joined the band shortly thereafter. Arise and Conquer and Eternal were both released over the course of 2008 and 2010. In 2012, the band again saw lineup changes with Bernartowicz and Alford departed from the band. Elisha Mullins of The Burial took over Bass for a brief time before Ryan Tidwell took over. Mark Randazzo took up Rhythm Guitars during this time, and the lineup recorded Return to Life.

Randazzo departed in 2013, with Jack Daniels taking up the position. Supreme Chaos was released the following year. However, Hengle departed shortly afterward, with the Bass position being passed on to a returning Bernartowicz. However, by 2017, Bernatowicz again departed, with Andy Cutrell joined the band. Longtime Drummer Alex Hemp departed from the band as well, with The Burial/Hope for the Dying Drummer Kaleb Luebchow taking up the drumming position. The band would also record Alpha that year. 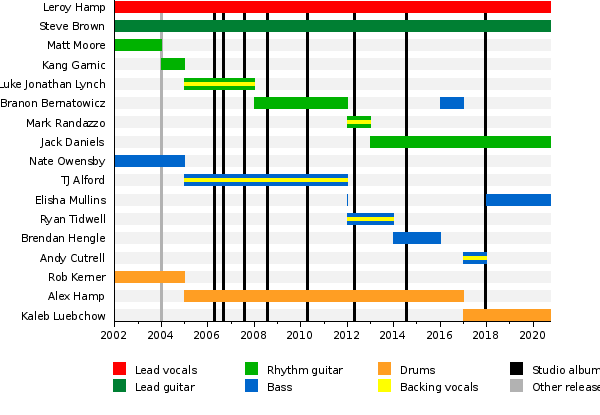 Retrieved from "https://christian-metal.fandom.com/wiki/War_of_Ages?oldid=1956"
Community content is available under CC-BY-SA unless otherwise noted.