Vengeance Rising is a thrash metal band from Los Angeles, California in the United States. The band formed in 1985 as Sacrifice but changed their name to Vengeance the same year, until 1987. The band was formed by Doug Thieme and Roger Dale Martin. They would hire Larry Farkas soon after. The band is known for their amazing albums, as well as the controversy that followed in 1992 when Roger Martinez became an "Atheistic Satanist".

In 1985, the band began as Sacrifice, with the lineup of Doug Thieme (Guitars) and Roger Dale Martin (Bass). The band would then hire Drummer Steve Bertram. However, Bertram did not last in the band long and would be replaced by Michael "Mike" Betts of Neon Cross. The band's name would change their name to Vengeance, due to the already preexisting death metal band Sacrifice.[1]

After the name change, in 1986, the band hired Sharon to perform vocals. The band, now consisting on Sharon, Thieme, Betts, and Martin would perform for an additional year until they changed their name to Vengeance Rising, also hiring Larry Farkas on Lead Guitars (ex-Deliverance), Glen Mancaruso on Drums, and Glenn Rogers on Rhythm Guitars (Deliverance). Mancaruso agreed to perform drums temporarily until they were able to find and hire a new drummer.[2] Soon thereafter, they would hire Roger Martinez on Vocals and everything fell into place.[2]

The band, with the new lineup, signed to Intense Records. The band then recorded and released their debut album, Human Sacrifice. The band toured on the album with the lineup. The same year, the band would release a demo titled Vengeance. In 1989, the band was featured on a split album, featuring Sacred Warrior, Deliverance, Bloodgood, Shout and David Zaffiro. The album was released through Frontline Records.[3]

In 1990, the band released their sophomore album, titled Once Dead. The band members began to feel a disconnect with Martinez, as he would not tour with the band in the van. After the Once Dead Tour, the members met with Martinez and arranged a way for him to keep control of all debts that the band had, with Martinez agreeing to the terms.[2][4] The band members would, however, later on be accused by Martinez of thievery and leaving him to handle all of the band's debts.[2] These claims were not true.[2]

In 1991, Martinez hired Lead Guitarist Derek Sean (ex-Mortification) and Drummer Chris Hyde (ex-Deliverance, ex-Holy Soldier) to perform on the new upcoming album, titled Destruction Comes. The album is generally considered to be a failing album, as the first two albums were considered the best.[5] However some fans appreciate it more than others.[6] The album also featured additional guitars and bass by Jimmy P. Brown II (Deliverance), Victor Macias (Tourniquet), and Jaime Mitchell (Scaterd Few).

After the album was released, Hyde and Sean departed from the band. Martinez only hired Johnny Vasquez officially for drums, while the rest of the musical section he filled with live musicians. Martinez and Vasquez recorded their newest album, Released Upon the Earth. The live band, consisting of Guitarists George Ochoa (Deliverance, ex-Recon) and Daniel Cordova (Shades of Crimson) as well as Michael "Mike" Wagel on Bass. After the album released, the band split up. The band released a compilation album titled Anthology.

Roger Martinez had previously been apart of the Pentecostal Foursquare Church and was baptized there.[7][8] He eventually joined a church near Hollywood, where he became a pastor. However, by the release of Released Upon the Earth, he had left his pastor position to perform music full-time.[7] While there, he began looking into faith healing, which found to be fraud.[8] In the mid 1990s, Martinez departed from the Christian faith, telling HM Magazine he was a committed atheist in 1997.[7][8] There was some speculation that he was never a Christian and he just put on a performance. According to friends of Martinez, Scott Waters (Ultimatum) and Steve Rowe (Mortification), Martinez began to record music that counteracted his Christian career. Martinez then began making death threats towards individuals he claimed "stabbed him in the back", including Steve Rowe, whose band, Mortification, Martinez assisted in getting a record contract.

At this point, he began working on a non-Christian album under the name Vengeance Rising, however, with much luck the venture never saw the light of day and Martinez disappeared for a brief time. The band at the time had several musicians formerly of the Christian metal scene, who had lost their faith.

In 2004, the founding members, Thieme and Martin, alongside Farkas and Mancaruso reformed the band with Ultimatum vocalist Scott Waters to play a reunion show at the Chain Reaction in Anaheim, California.[9][10] However, since the band gave Martinez the rights to the debts, he claimed that he owned the name of the band as well. He threatened to sue the band so the concert could not happen.[11] The band changed their name to Once Dead, so they could play the show.[12] The band became it's own project, rather than continued on the Vengeance name and legacy.[12]

In 2017, the band, with the help of Roxx Records, re-released Human Sacrifice on vinyl for it's 30th anniversary. On August 9, 2017, it was reported that Vengeance Rising would reunite at the So Cal Metal Fest 2, with the original lineup of Thieme, Martin, Farkas and Macarsuo, with Jim Settle of Hand of Fire performing vocals for the show.[13] The band performed the show with no incident. The band is currently signed to unspecified label and is working on new music. Despite being known as Vengeance Rising, the band is changing their name to something else.[2] The band returned to the moniker of Once Dead, with the change of Roger Sampson of Precious Death on Drums. 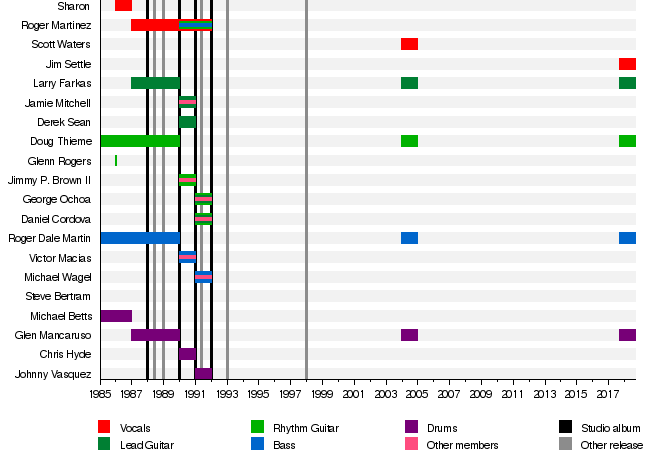 Retrieved from "https://christian-metal.fandom.com/wiki/Vengeance_Rising?oldid=3566"
Community content is available under CC-BY-SA unless otherwise noted.