Tourniquet is a neoclassical thrash/speed metal band that formed out of Los Angeles, California in 1989. The band has gone through some lineup changes, with Ted Kirkpatrick being the only remaining original member. The band has released countless albums and videos. The band has earned six GMA Dove Awards nominations and have won multiple recognitions by HM Magazine.

Tourniquet began in 1989, with Guitarist/Vocalist Gary Lenaire and Vocalist Guy Ritter, with Drummer Ted Kirkpatrick being added to the lineup later.[1] Kirkpatrick formerly played with Trouble, while Lenaire and Ritter played for Holy Danger.[2] The group was apart ofSanctuary International, which doubled as a rock and metal refuge.[3][4] The band would hire Mark Lewis on guitars and Erik Jan James on bass to record an album in 1990, releasing the album, Stop the Bleeding the same year, before adding Erik Mendez on guitars and Victor Macias on bass.[3] Roger Martinez of Vengeance Rising introduced the two to Tourniquet.[3] Before their inductionhowever, the three official members, alongside Lewis and James appeared in a band photo to give fans the idea that they were a full band.[5]

The album was produced by Bill Metoyer of Metal Blade Records, who had previously done several Slayer albums, as well as fellow labelmates Deliverance. The album received some notoreity in the mainstream scene and is considered a notable thrash metal album. The album showcased speed/thrash metal with King Diamond-esque vocals. Ritter sung melodically, while Lenaire did the aggressive vocals. After adding Macias and Mendez to the first official lineup, the band became known as the "classic lineup".[6] While the two did not play the song, the band performed a music video for "Ark of Suffering". The video received some airtime on MTV. The song is best known for the band's views on animal abuse.

In 1991, Tourniquet abandoned most of its 1980's metal influence for thrash and mix of rap metal, which was featured on the song "Spineless" with the band P.I.D. rapping over the song. The song was in the vein of Anthrax and Faith No More.[7] The band released Psycho Surgery on July 1, 1991. The next year, the band released Video Biopsy, a VHS tape. In 1993, the band recorded what is considered their technical and dark album, Pathogenic Ocular Dissonance.[7] Pathogenic Ocular Dissonance quickly became a fan favorite album and the band's most popular album. This is due to Metal Blade releasing it to the secular market, while Intense Records released it to the Christian market.

Vocalist Guy Ritter had grown tired of the band's new musical style and the material the band was writing. He did not care for the aggressive material the rest of the band was writing.[6] Erik Mendez stated that, though the two were friends, they rarely saw each other on tour, beyond the shows, and his sudden departure made sense to him.[3] After Ritter's departure, the band recorded a live EP, with Les Carlsen of Bloodgood on vocals. Soon thereafter, Luke Easter would take the official position of vocalist. The band was then scheduled to play Milwaukee Metal Fest, however, their performance was cancelled due to the satanist Glenn Benton of Deicide stating that he would not play with a Christian band. This quickly brought more publicity and popularity to the band.[8] After Milwaukee Metal Fest, Mendez departed the band.[3]

By 1994, the band discarded their medical terminology within their lyrics, for the most part, and altered their style to a more accessible hard rock/heavy metal with the album Vanishing Lessons. The album was recorded as a four piece; Easter on Vocals, Lenaire on Guitars/Vocals, Kirkpatrick on Drums and Macias on Bass. After the album was released, Aaron Guerra of Final Notice joined the band as their new Guitarist.[3][4] Metal Blade Records opted not to promote Vanishing Lessons, as it was not the heavy style they were looking for, which led to them working exclusively with Intense Records until 1997.

The album spawned "Twilight", which became their debut CCM hit.[7] A video for the song "Bearing Gruesome Cargo", which was released through which came out with Pushin' Broom. Shortly afterwards released an EP titled Carry the Wounded. However, several fans disliked the EP due to the inclusion of a ballad.[8] Later the band released a compilation titled The Collected Works of Tourniquet, which included "The Hand Trembler" and "Perfect Night for a Hanging". Many of the fans regard these songs as their heaviest material. In 1996, Macias departed from the band due to "theological differences",[5] however Mendez, being one of Macias' best friends, stated that was most likely untrue.[3][4] Mendez speculates that Macias departed from the band due to the image that Kirkpatrick liked to uphold.[3][4]

Lenaire would also depart from the band in 1996, reuniting with Ritter and forming a new project titled Echo Hollow. Lenaire also formed Cripple Need Cane. In 1997, the band signed to Benson Records and hired on Vince Dennis on Bass in December.[5] They also released their album Crawl to China. The album generated divided opinions due to it's experimental material.[9] The band would then release a VHS titled The Unreleased Drum Solos of Ted Kirkpatrick, as that is what he is known for. In 1998, the band recorded a number of songs as acoustic and released them as an album titled the Acoustic Archives. In 1999, Dennis departed from the band leaving the lineup as Easter, Guerra and Kirkpatrick.[5]

In 2000, Tourniquet began to return to their roots, beginning to write heavier songs. This time around, however, signed to Metal Blade Records directly and officially, and began to work on their most technical album since Pathogenic, Microscopic View of a Telescopic Realm. The album would also contain a sequel to "The Skeezix Dilemma" titled "The Skeezix Dilemma II - The Improbable Testimony of the Pipsisewah". The album received enthusiastic reviews from reviewers and fans alike. In 2001, the band reissued their first three albums remastered with bonus tracks, through Pathogenic Records - Kirkpatrick's label. In 2002, bassist Steve Andino - after filling the live role - officially. Guerra departed for personal reasons.[7]

In 2003, the band recorded their eleventh album, Where Moth and Rust Destroy, with the lineup of Kirkpatrick, Andino and Easter. The guitars on the album were supplied by Marty Friedman (ex-Megadeth) and Bruce Franklin (Trouble). The album continued the progressive direction the band was headed in. Two songs, "Restoring the Locust Years" and "A Ghost at the Wheel" received some air time on the radio. The band also released two DVDs. Guerra would rejoin the band in 2005, making sporadic appearances at concert events both in the US and abroad. The band also played at Elements of Rock Festival and Bobfest. The Bobfest concert was also recorded on a DVD, Till Sverige Med Kärlek. In 2008, Andino departed from the band.

On December 28, 2015, Luke Easter departed from the band, on amicable terms.[13] In 2017, the band was added to the Exodo Fest, playing alongside Broken Flesh, Abated Mass of Flesh, Impending Doom and Grave Robber. The band also played with a new live lineup, featuring Guitarist Jamey Henn, Bassist Andy Robbins (ex-Holy Soldier), and Vocalist Jason Robinson (Wrath of Typhon).[14] On March 17, 2018, Kirkpatrick revealed that Deen Castronovo (Fear Factory, Marty Friedman, Ozzy Osbourne) was performing on the band's newest album's title track.[15] On May 22, 2018, the band released the track, titled "Gazing at Medusa" for their upcoming album of the same name. It was alter announced that Chris Poland would be performing all Lead Guitars on the album.[16] A track titled "Sinister Scherzo" was released on September 19, 2018, with Tim Ripper Owens (Iced Earth, Judas Priest, Charred Walls of the Damned) on Vocals.[17] 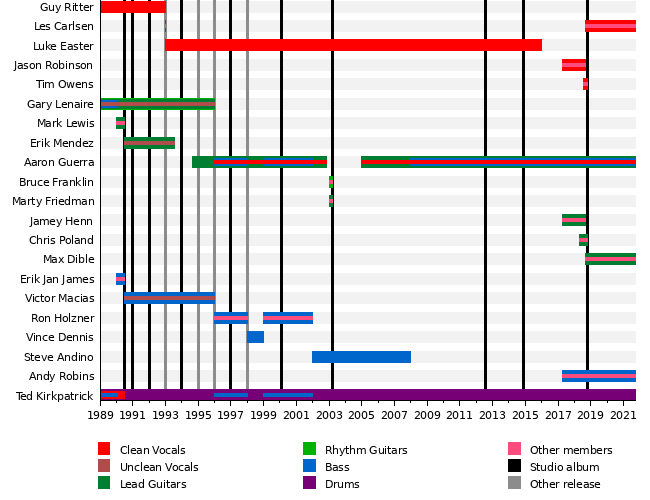