Society's Finest is a metalcore band that began out of Dallas, Texas in the United States. The band began in 1997, being founded by Joshua Ashworth and Joel Bailey. The band originally broke up in 2003, reunited in 2004, broke up again in 2011, and reunited in 2014. The band has released three studio albums and three EPs through various record labels.

Society's Finest started in 1997, formed by Joshua Ashworth on Vocals and Joel Bailey on Bass. The two hired on Guitarists Rob Pruett and Kris McCaddon and Drummer Chad Wilburn. In 1998, the band recorded their debut release, a split release with My Spacecoaster. They were also featured on Deadself Records' compilation, Blessed Be This Killing.[1] In 2000, the band also released an EP, titled Private Conflicts and Suicides. Following the two releases, the band signed with Solid State Records and released their debut album, The Journey...So Far in 2000.[2]

In 2004, the band reunited with Ashworth, Bailey, and multiple new members, Guitarists Eli Bowser, Guy Turner, Randy Watts, Nick Nowell, and Drummer Stephen Poole. The band recorded their sophomore album, Love, Murder, and a Three Letter Word, which featured two EPs put together - Private Conflicts and an EP titled the Texas EP.[4] The entire lineup, save for Ashworth, Bowser, and Turner departed, with Wilburn returning to Drum for the band, and Daniel Barton joining on Bass. The album was released through Hand of Hope Records.

The band continued on, in 2006 recording their third record, And I, the Drunkards. The lineup consisted on Ashworth, Bowser, Jason Roe on Drums, while Wilburn was unavailable, Barton and Turner. The album was again released by Hand of Hope, alongside Alveran Records. The band continued on until 2011 when the band broke up for their second time.

Society's Finest reunited in 2014 for a tribute show for Randall Watts, a former member, who had performed on Love, Murder, and a Three Letter Word, who had passed away due to an overdose.[4][5] The lineup consisted of Ashworth, Roe, Tyler Berry on Guitars, and Jordan Brady on Bass. Brady departed from the band following the shows, with David Cezero took over on Bass. In 2016, the lineup departed from the band, save for Ashworth, with Bowser returning to the band.[4] The two began to write a new EP for the band.[4] In 2017, it was announced Wilburn had returned to the lineup of the band. The three are currently working on new material. 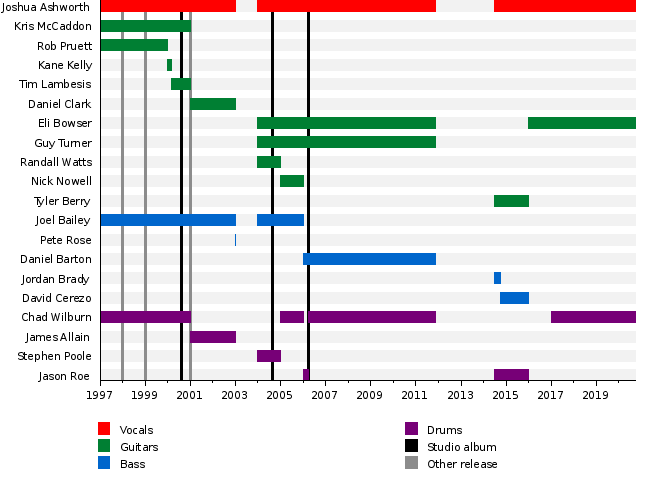 Retrieved from "https://christian-metal.fandom.com/wiki/Society%27s_Finest?oldid=2904"
Community content is available under CC-BY-SA unless otherwise noted.