Project 86 is a hard rock and post-hardcore band that originated in Orange County, California in the United States. The band formed in 1996 and has been signed to highly established record labels Atlantic Records, Tooth & Nail Records and BEC Recordings before eventually going independent. The band has recorded ten studio albums, a live album, four EPs, and numerous singles.

Project 86 started in 1996 with the lineup of Vocalist Andrew Schwab, Guitarist Randy Torres, Bassist Matt Hernandez, and Drummer Ethan Luck. Schwab originally told Torres and Luck that it would be "cool" to form a Christian band that sounded like Rage Against the Machine. The band formed out of Orange County, California in the United States. Hernandez departed early on, with Luck switching to Bass. Drummer Alex Albert joined on, following Hernandez's departure. The band recorded a three-song demo with this lineup before Luck departed. Former Bloodshed Bassist Steven Dail came on and took over Bass, completing the lineup.[1]

The band was voted one of the top independent artists in HM Magazine in 1997, with the band performing at Tomfest soon thereafter, with Tooth & Nail Records gaining interest quickly. In 1998, the band released their debut self-titled album, which was released through BEC Recordings. The album was released in June and was well received and sold over 50,000 copies.[2][3] In May 1999, the band embarked on The Warriors Come Out and Play Tour with P.O.D. and Blindside.[4]

Following up the successful debut, the band began to work on their sophomore album, Drawing Black Lines, which was released through Tooth & Nail Records and was produced by Garth "GGGarth" Richardson. Atlantic Records licensed a co-release with Tooth & Nail. The album peaked at number 37 on the Billboard Heatseekers scale and was well received from critics. By this time, the band had begun to amass a sizeable fanbase.[5] Following the album's release, the band added on former No Innocent Victim Guitarist Corey Edelmann. The band then embarked on a tour with P.O.D., Hed PE, and Linkin Park on the Kings of the Game Tour in October 2000.[6] The band's sophomore album became their best selling album, selling 120,000.[7]

By 2002, Edelmann had departed and the band had begun working on their newest album, Truthless Heroes, who they had teamed up with Slayer producer Matt Hyde. The album was released in September 2002. The album was considered very controversial by promotional websites. In fall 2002, the band embarked on a tour with Taproot.[8] That same year, Project 86 played shows with Thirty Seconds to Mars, Trapt, Blindside, Trust Company, Sevendust, and Finger Eleven.

In mid-2003, the band departed from Atlantic Records, as well as their management team. The band was disappointed in how Atlantic's marketing for Truthless Heroes was overhyped compared to Drawing Black Lines, which was much more successful. Following their departure from Atlantic, they formed their own label called Team Black Recordings, which they released their fourth album, Songs to Burn Your Bridges By through in Fall 2003. However, the following year, the band re-signed with Tooth & Nail Records.[9] In June 2004, Songs to Burn Your Bridges By was re-released through the label, with different artwork and three new songs - "A Shadow on Me", "Breakdown in 3/4", and "3 Card" - mixed by Aaron Sprinkle.[10] Later that year, the band performed at Purple Door Festival, a Christian music festival. Unfortunately, fans threw mud everywhere and covered the stage and musical equipment, where thousands of dollars of equipment was damaged.

In Spring 2005, the band joined with Richardson once again to record their fifth album, ...And the Rest Will Follow. The band recorded multiple demos and flew to Vancouver, British Columbia in Canada to record, with the process being filmed and later released under the DVD documentary Subject to Change: The Making of ...And the Rest Will Follow.[11] To promote the album, a new song was released on their PureVolume page until the album was released, with it officially being released on September 2005 and debuting at #131 on the Billboard 200 charts.[12] Following the album's release, the band embarked on a Fall release tour with Spoken, Number One Gun, The Fold, and Mourning September.[13] In January 2006, a live performance of "My Will Be A Dead Man" was broadcasted on the live television program Attack of the Show!.[14]

In March 2007, Project 86 announced that Albert was departing from the band to pursue other interests.[15] Instead of attempting to locate a new full-time replacement, the band hired former Shiner and HUM Drummer Jason Gerken.[16] Rival Factions had a different sound than their previous releases, sporting a more gothic sound. Over the recording and demoing process, the band recorded 40 songs in the end, but only ten were used.[17] The documentary was filmed that detailed the recording process, titled I Want Something You Have: Rival Factions The DVD. The album was officially released in June 2007, where it peaked at #124 on the Billboard 200. The band proceeded to tour with labelmates MxPx, Showbread, and Sullivan on the Summer Tooth & Nail Tour.[18]

Many of the 30 remaining tracks written were fully mixed and recorded, despite not ending up on Rival Factions. The songs were put on an EP, titled The Kane Mutiny EP, which was released exclusively on iTunes in November 2007. The band recorded a single and cover of "This Time of Year", which spurred on a release of a Christmas EP, which shared the same title of the single. Unlike the previous EP, it was made on the physical and digital formats.[19]

In early 2009, the band recorded their seventh album, Picket Fence Cartel, with Jason Martin (Starflyer 59) and Ulrich Wild who both had previously worked with the band on previous releases. The album was a heavier release than their previous, as they honed in on the metal style. The album came out in July 2009 and peaked at #137 on Billboard 200. Later that summer, the band traveled on the Scream the Prayer Tour, alongside The Chariot, Haste the Day, Sleeping Giant, Oh, Sleeper, Gwen Stacy, For Today, Agraceful, A Plea for Purging, and Corpus Christi.[20] Unfortunately, Torres was not available for the tour, which led to Dail taking over the Guitars and the band adding a fill-in Bassist by the name of Alex.[21] It became apparent that Torres had departed from the band soon thereafter. By mid-October 2009, the band embarked on the Picket Fence Cartel Tour with Children 18:3, Showbread, The Wedding, and Yearling, and the second part in Spring 2010 with Flatfoot 56 and Wavorly. In December 2010, XV Live, the band's debut live album, was released. The album featured material from every album, except for their debut. Torres and Dail both departed around the same time, with no announcement from any sites.

In December 2011, in an effort to become an independent Team Black Recordings, after their Tooth & Nail Records' contract was up, started a Kickstarter campaign. The album, titled Wait for the Siren, was recorded between January and February 2012, with the guest appearances by several musicians. Gerken had also departed around the same time as Torres and Dail, leaving Schwab the sole member. Schwab hired on Andrew Welch (Disciple, Thousand Foot Krutch), Blake Martin (A Plea for Purging), and Dustin Lowry (The Becoming) on Guitars, Cody Driggers (The Wedding) on Bass, and Rocky Gray (Living Sacrifice, Soul Embraced, Evanescence) to record on the album. Following the album's release, Schwab kept on Lowry and added on Mike Williams and Scott Davis on Bass and Drums respectively. However, after 2013, Davis and Williams departed, with Driggers taking over Bass and Ryan Wood, formerly of 7 Horns 7 Eyes, joined on Drums. With this lineup, the band began to work on a new album, which would become their ninth album.

Knives to the Future and Sheep Among Wolves (2014-present) Edit

The band began pre-production for the new album on June 6th followed by a month-long recording session in Steelman Studios in Van Nuys, California, with Matt McClellan producing and Steve Evetts mixing, as well as Dan Mumford drawing the artwork. The band went to Los Angeles recording 18 new tracks and an acoustic EP. Lowry departed from the band with Darren King (The Overseer) joining on Guitars.[22] Project 86 released their newest album Knives to the Future on November 11, 2014, through their independent label, Team Black Recordings.

In 2016, the band started a celebration for their 20th anniversary.[23] They announced that they would begin working on another new album, which would mark their tenth album and send a cover EP titled Influence EP.[24][25] On September 13, 2016, the band announced their 20th-anniversary tour with support from Death Therapy.[26] From October 2016 to October 2017, while the band was writing and recording new music, they released eight new songs total for pledgers who pre-ordered new album on PledgeMusic. On October 9, 2017, it was announced that a new album, Sheep Among Wolves, was to be officially released on December 5, 2017, in celebration of their 20th anniversary as a band.[27][28][29] The album saw the departure of Driggers and Wood, with King taking over Guitars, Bass, and Keyboards and The Overseer/Wolves at the Gate Drummer Abishai Collingsworth.[30] 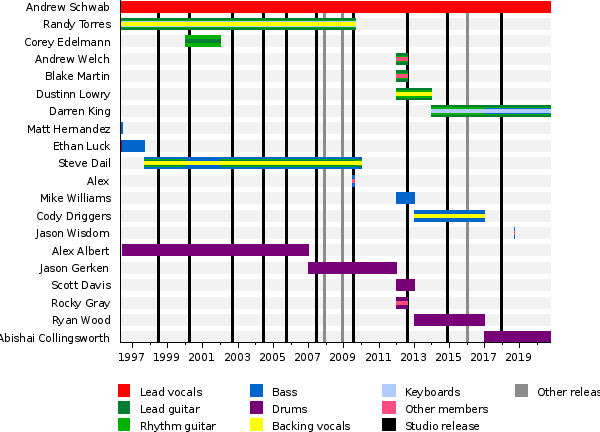 Retrieved from "https://christian-metal.fandom.com/wiki/Project_86?oldid=1724"
Community content is available under CC-BY-SA unless otherwise noted.