Overcome was a hardcore punk and later death metal-styled band that was based out of Phoenix, Arizona in the United States. The band began in 1993 but ended around 2001. However, in 2010, the band reconvened and recorded a new album and EP before performing their final show at Facedown Fest 2017.

Overcome began in 1993 with the lineup of Vocalist Jason Stinson, Guitarist Reggie Shumay, Bassist Jason Obergfoll and Drummer Ryan Hayes. In 1995, the band put out two releases, a self-titled EP and a split album with No Innocent Victim and Clay.[1] In 1996, the band released an album, titled Blessed Are The Persecuted,[2] the band's debut studio album and an EP titled As The Curtain Falls with the lineup of Stinson, Shumway, Obergfoll on Guitars, new Bassist Rob Kroelher and Hayes.[3]

However, following the EP's release, Kroehler and Hayes departed from the band. The two remaining members hired Drummer Alex Woodford and Bassist Ken Williamson. In 1997, the band recorded their sophomore album When Beauty Dies, which came out through Tooth & Nail Records, as had the previous album.[4]

In 1998, the band saw the departure of many members as well as a new EP titled The Life of Death.[5] The EP, alongside their self-titled debut, was released through Facedown Records, with the band becoming the label's first official signing.[6] At this time, Stinson was the final original member remaining, hiring Steve Owens and BJ Osvak on Guitars, Jason Bowen on Bass and Ethan Pajak on Drums. However, Bowen and Owens did not remain in the lineup, with Nick Westby and Matt Brooks taking over their positions.

The following year saw the release of the band's fourth studio album, Immortal Until Their Work Is Done.[7] Following the release of Immortal, Owens and Bowen returned to the lineup. However, it was short-lived; in 2001, the band announced they were disbanding. The members went on to form Indwelling, a death metal band that would sign with Facedown and Solid State.

Overcome reunited in 2010 with an all-new lineup, with Stinson switching from Vocals to Guitars, Bowen returned on Bass, Thomas Washington on Vocals (ex-Indwelling), Nick Greenwood on Guitars and Jon Strunk on Drums. Following the reunion, the band recorded their new album, The Great Campaign of Sabotage, the band's fifth album, with the band returning to Facedown Records and releasing the label's 100th release.[8] The album marked a totally different direction for the band, as all previous releases were more hardcore/metalcore, the album conveyed a heavier aspect, leaning more towards death metal and metalcore.

The following year, Greenwood departed from the band, being replaced by Steven Cosand of Sanhedrin on Guitars. The band began to work on new material, writing and recording a new EP in 2013, titled No Reserves. No Retreats. No Regrets., which similarly to the previous release, focused more on the death metal and metalcore style. In 2017, Overcome announced they would be performing at Facedown Fest that year.[9] They later announced that the show would be the last one they performed, with the lineup of Stinson, Bowen and the returning cast of Owens, Westby, and Pajak.[10] Stinson and Pajak formed a country band called Some Dark Hollow.[11] 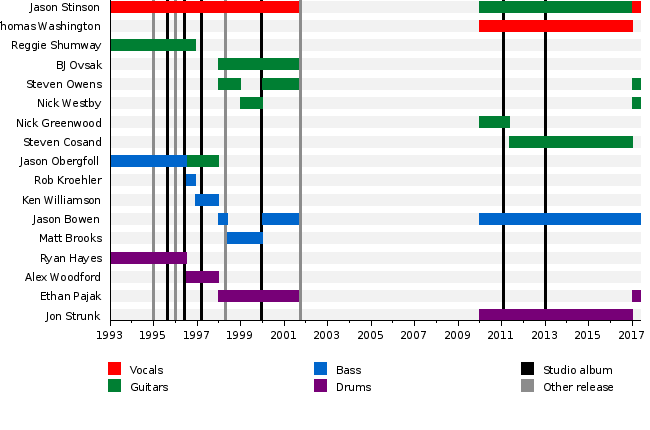 Retrieved from "https://christian-metal.fandom.com/wiki/Overcome?oldid=2893"
Community content is available under CC-BY-SA unless otherwise noted.