Mortification are a death metal/grindcore band that began in 1985 as Lightforce, eventually becoming a death metal band rather than the lighter hard rock/power metal band they previously were.

in 1985, Lightforce, the band that eventually became Mortification, was formed with the original lineup of Steve Rowe (Bass), Phadrah Hirschfield (Vocals), Chris Miller (Lead Guitars) and Rohan McDowell (Drums). The band was signed to Pure Metal Records and had several releases, including two full length albums, Battlezone and Mystical Thieves.[1] In 1989, the band toured with popular glam metal band, Stryper. Over the course of the band, the entire lineup shifted, with Rowe being the only original member of Lightforce by the time it became Mortification. Cameron Hall, who had played on Battlezone, joined the band again in 1990, with Jayson Sherlock taking the drumming position at the end of the band.[2]

The band then recorded a demo album that was very extreme, molding into a death metal band, titled Break the Curse, which they released as Mortification and Lightforce.[1][3]

After the album was recorded and subsequently released, Hall departed from the band, shortly thereafter being replaced by Michael Carlisle. With the lineup of Rowe, Carlisle, Sherlock and Derek Sean performing session guitars, the band recorded their self-titled debut.[4]

In 1992, the band released their second album, and most popular album, Scrolls of the Megilloth, or more commonly referred to as Scrolls. The band - Rowe, Carlisle and Sherlock - recorded the album over the course 1992 until it's release in August. The album also featured the backing vocals of Roger Martinez of Vengeance Rising and Andrew Tompkins of Paramaecium.[5] Sherlock also contributed Lead Guitars to "Ancient Prophecy".[6] The album was released through Nuclear Blast Records, a secular label with an owner who was determined to begin releasing material with more Christian lyrics.[1] The album was incredibly well received, while also being known as some of the most frightening vocals recorded,[7] with Rowe and Sherlock doubling their vocals.[2] A video-compilation was released titled Grind Planets (a play on Rock Star) was released, with music videos of the band.[8]

In 1993, the band recorded Post Momentary Affliction, however, Sherlock had lessened his involvement with the band, contributing to one track, "Butchered Mutilation" which only appeared as a bonus track for the album. The drums on the album were said to have been recorded by Sherlock, however, he claims this was not the case.[2] Sherlock performed his final show at Black Stump Festival in 1993,[9] while Johnny Vasquez of Vengeance Rising performed live with the band at Cornerstone Festival, over July 4th weekend.[2] During the festival, the live video, Live Planetarium was recorded, later being cited as the best live album they had ever seen.[10] After Sherlock's departure, where he joined Paramaecium, Phil Curtis-Gibson, formerly of Callous, joined the band.

In 1994, with the lineup of Rowe, Gibson and Carlisle, the band recorded their fourth official album, Blood World. With Blood World, the band began to shift to a more hardcore punk influence, with a more modern thrash/death metal style.[10] On the album, Rowe focused more on shouts, rather than his famed death metal growl. The album began setting the band apart, with the double-edged extreme genres. Despite Scrolls becoming their most popular album, Blood World was their most purchased.[11] The same year, 1994, saw the birth of Rowe's label, Rowe Productions. After the album was released, Carlilse and Gibson departed from the band, Rowe remained the sole member.

Together, alongside the help of many friends, he recorded the album Primitive Rhythm Machine in 1995. Musically speaking, the album exhibited all of their previous genres of music. The lineup of the album was Dave Kellogg on guitars for two tracks, Vett Roberts (Recon) on vocals for one track, Jason Campbell on lead guitars for three tracks, George Ochoa on keyboards and guitars for the remainder of the album, rounding out with Bill Rice on drums.[12]

After the release of their fifth album, Rowe began searching for a new guitarist and drummer. The drum position was filled by longtime roadie Keith Bannister, who became a Christian during Mortification's first tour in 1990. Rowe saw him practicing drums and was thoroughly impressed with his progress, choosing him instantly for the position. The guitar position was shortly thereafter filled by Lincoln Bowen. With this lineup, the band recorded their sixth release, EnVision EvAngelene.

Two EPs were released afterwards as well; Live Without Fear and Noah Sat Down and Listened to the Mortification Live EP While Having a Coffee. Unlike Live Planetarium, the live EP was recorded in a small club with a raw sound. EnVidion, a video compilation was released, featuring interviews and such. Rowe released a book later on that year titled Minstrel. In late 1996, Rowe was diagnosed with leukaemia, going through 18 months of remission.[1]

Shortly after Rowe was diagnosed, the band recorded a new album, titled Triumph of Mercy, which came in August 1998, with Rowe Productions releasing it in the United States and Nuclear Blast Records releasing it in Europe. Lyrically, the album dealt with the struggles Rowe dealt with, band-related and personally. The band went on a North American tour, following the release of the album.[1]

By 1999, the band released their eighth full-length album, Hammer of God. The style on the album was no longer death metal styled, while the Christian lyrics remained as present as ever. The album exhibited more of a thrash metal/power metal style. The lineup for the album was Rowe, Bowen and Bannister.[1] A European tour followed the release.[1] By August 1999, the band sold quarter of a million albums across America and Europe.[1] In 2000, the band released yet another live album, titled 10 Years Live Not Dead, recorded at Black Stump Festival 1999, featuring a new song "Dead Man Walking". Bannister departed the band, being replaced by the young Adam Zaffarese, who was 16 years old at the time.[13] Rowe had seen Zaffarese play with his band The Greeting Method.[13]

The new lineup released album The Silver Cord is Severed in 2000 and the band went on its first world tour. The music continued to be thrash and groove metal. While many fans thought the album was the weakest release from the band, it sold well, as did all of their previous releases. This due to the fact that the band, as stated by Nuclear Blast founder Markus Staiger, that the band were looked at superstars within the Christian metal scene.[14] The end of 2000 saw the departure of Bowen from the band, leaving the band consisting of just Rowe and Zaffarese.

A compilation album was released in 2002, titled Ten Years 1990 - 2000 Power, Pain and Passion. However, the lineup changed once again, adding two new guitarists into the band - Mick Jelinic (Terraphobia) and Jeff Lewis. The same year, the band recorded and released Relentless. The band played as a four-piece for only a short period of time, until Lewis departed, later joining Sympathy.

In 2004, saw Brain Cleaners release, with Mike Forsberg (ex-Cybergrind, Martyrs Shrine) on drums. The album was considered their heaviest release in 10 years, since 1994's Blood World. The album was mostly thrash/death/groove metal styled. In 2005, Damien Percy joined the band as their drummer, shortly after the departure of Forsberg.

In 2006, the band released a new album, titled Erasing the Goblin. The album was originally titled Impaling the Goblin, but however, due to many complaints, as in some cultures that sexual implications, they changed the name. The same year, "Livin Like a Zombie" from Brain Cleaner was featured in the background of BME Pain Olympics: Final Round.

In early 2008, the band's first nine releases were re-released by Metal Mind Productions.[15] In July of the same year, Rowe stated that Damien Percy was departing from the band. He would be replaced by Dave Kilgallon, who played drums for Scourged Flesh and Grave Forsaken. On June 6, it was announced that Mortification will record their new album in 2009.[16]

They then began to record a demo for the album.[17] Mortification then announced the title, The Evil Addiction Destroying Machine, which was described as "easy-to-listen thrash".[18] Rowe however stated that some fans would not enjoy the album, like all albums.

In 2011, Jelinic departed the band, as did Kilgallon. Bowen returned to the band, with Andrew Esnouf joining as the drummer.[19] In 2013, Rowe announced his retirement from the Christian music industry in 2015.[20]

An interview with Rowe revealed that in 2016, Mortification was re-releasing Post Momentary Affliction on vinyl, via Soundmass, with former drummer Jayson Sherlock redesigning the artwork.[21]

On January 1, 2018, Rowe put out a post on the Mortification facebook, stating that Mick Jelinic and him had reconnected and had been practicing older material. He also stated that they may write new material, with Jelinic, leaving the lineup of Rowe, Bowen, Jelinic and Esnouf.[22][23] 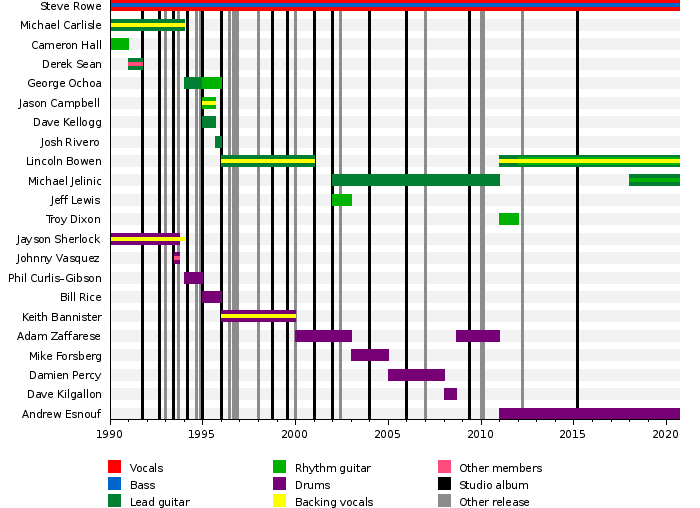 Retrieved from "https://christian-metal.fandom.com/wiki/Mortification?oldid=785"
Community content is available under CC-BY-SA unless otherwise noted.