Impending Doom is a deathcore band that began in 2005. The band began out of Riverdale, California in the United States. The lineup originally consisted of Vocalist Brook Reeves, Guitarists Manny Contreras and Chris Forno, and Drummer Isaac Bueno, with only Reeves and Contreras remaining.

On October 31, 2005, Impending Doom began with Vocalist Brook Reeves and Guitarist Manny Contreras.[1] The band recorded a demo, titled The Sin and Doom of Godless Men, after recruiting Chris Forno on Guitars, Jon Alfaro on Bass and Isaac Bueno on Drums.[2] Shortly after the release, Greg Pewthers joined the band as a third guitarist after departing from Oblige.

Later that year, Alfaro departed from the band, with David Siitig taking over his place as the Bassist. Forno departed from the band as well, however was never replaced. Bueno was replaced by Andy Hegg. On January 20, 2007, officially signed to Facedown Records,[3] and following their signing, the band officially recorded their debut album, Nailed. Dead. Risen. and which was released by Facedown Records in 2007.[4] However, after the album was finished, the band employed several substitute drummers, as Hegg was dedicated to a soccer scholarship. In the Fall of 2007, the band embarked on tour with Dead to Fall, Winds of Plague and With Dead Hands Rising.[5]

Lineup Instability, The Serpent Servant and There Will Be Violence (2008-2011) Edit

Hegg would be replaced by Chad Blackwell, who performed for the band live until 2008, when he officially took over. During this time, Pewthers returned to Oblige, now known as The Devastated, and was replaced by Cory Johnson (ex-XDEATHSTARX, ex-Sleeping Giant, ex-MyChildren MyBride). The band performed at the Scream the Prayer Tour in 2008, alongside Sleeping Giant, Mychildren Mybride, War of Ages, Before Their Eyes, Blessed by a Broken Heart, Soul Embraced, With Blood Comes Cleansing, Here I Come Falling, and Agraceful.[6]

In 2009, after the drastic lineup changes, the band recorded their sophomore album, The Serpent Servant, which saw Blackwell and Johnson's debut. The album saw a change in their style, going from grindcore/goregrind to deathcore.

Sometime after the release, Blackwell left the band to attend the Atlanta Institute of Music, which saw the return of Bueno on Drums. However, Bueno's stint did not last long, with him and Contreras departing from the band in 2010.[7][8] Contreras had joined Oblige, while Bueno remained musically silent. The album, There Will Be Violence, was released later that year, with Brandon Trahan (ex-Mirror of Dead Faces, XDEATHSTARX) taking over Bueno's position.[7] The band participated on the Thrash and Burn Tour alongside Through the Eyes of the Dead, Kittie, Born of Osiris, Asking Alexandria, Stick To Your Guns, Evergreen Terrace, Greeley Estate, Periphery, Motionless in White, and Chelsea Grin.[9]

2012 started off with the band's fourth album, Baptized in Filth, being recorded and produced by Andreas Magnusson, who produced bands such as Scarlet, Oh, Sleeper and The Famine. The album focused on God, Satan and the number of the Beast. After the album was officially released, Johnson was fired from the band and Contreras returned to the band reclaimed his place. Johnson went on to join MyChildren MyBride.

Reeves, on December 21, 2012, participated at the Mitch Lucker Memorial Show with Suicide Silence. Lucker died in a motorcycle accident, which sparked much sadness in the metal community. In January 2013, Eric Correa joined the band as their Rhythm Guitarist. The relationship between him and the band is that he had been acting as their Guitar Tech on tour. The band entered the studio in New Jersey with Will Putney and began recording their fifth studio album. The band then confirmed that their album would be titled Death Will Reign that was released on November 5, 2013, through eOne.[10] Impending Doom performed on the Scream The Prayer Tour once again.[11] Afterward, the band went into a three-year hiatus.

Impending Doom returned from their hiatus in 2016, when they announced they would be performing at Facedown Fest 2016, which also saw the reunion of Facedown Records alum Seventh Star.[12][13] The band's return much notice and the band would then reveal that they would stay active. During a concert, the band performed a new song, titled "The Wretched and Godless".[14] The song came out officially on April 2, 2018, with the announcement of a new album being released on June 22, titled The Sin and Doom Vol. II.[15] The band then shot a music video for their next single, which was titled "Everything's Fake", being released on May 14, 2018.[16] On June 11, 2018, the band released their third and final single titled "War Music".[17] On June 22, 2018, the band's sixth album, The Sin and Doom Vol. II was released through eOne. The album is a reference to their original demo.[18]

The band refers to its style of Christian metal as "Gorship", which is a portmanteau of Gore and Worship.[19] They also clarified that the band worships God and Jesus, rather than worshiping Gore, stating via Myspace.[20] 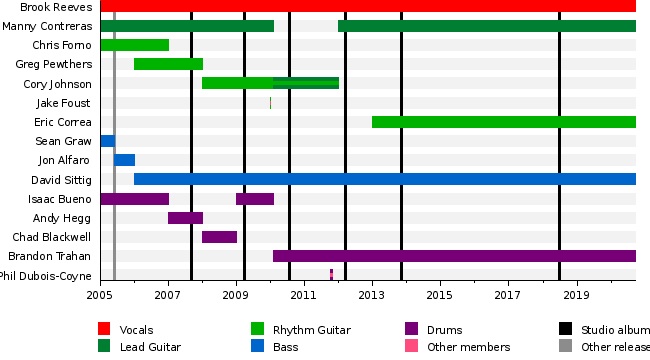 Retrieved from "https://christian-metal.fandom.com/wiki/Impending_Doom?oldid=1293"
Community content is available under CC-BY-SA unless otherwise noted.