Hope for the Dying, or more simply known as HFTD, is a progressive death metal band that originated in Jonesboro, Illinois in the United States. The band began in 2006, with the lineup of Josh Ditto on Vocals, James Houseman on Lead Guitars, Jack Daniels on Rhythm Guitars, James Red Cloud on Bass, and Brice Voyles on Drums, under the name of Convicted.[1] The band released an EP before changing their name.[2]

Once the band switched names, they signed with Facedown Records and released three albums and a single EP.[3]

Hope for the Dying began in 2006, as Convicted, with the lineup of Josh Ditto on Vocals, James Houseman on Lead Guitars, Jack Daniels on Rhythm Guitars, James Red Cloud on Bass, and Brice Voyles on Drums. The band released an EP titled Master of the Unspoken in 2006, before switching their name. The band released a demo in 2007, simply titled Demo 2007.[4] In November 2008, the band signed with Strike First Records, home to bands such as Saving Grace, War of Ages, and The Burial, and re-released their debut EP, which had been originally an independent release.[5][6][7] By the end of 2008, Cloud had departed, and been replaced by Zach Gowan. Gowan departed and Cloud reprised his role as Bassist, before once more departing. Jacob Capps took over the position of a Bassist.

The band toured on the Facedown Fest in 2009, alongside bands War of Ages, For Today, Hands, My Epic, Impending Doom, XDEATHSTARX, A Plea for Purging, No Innocent Victim, and many more.[8] Volyes and Capps departed in 2009, with Jesse Fleming and Ryan Dillon taking over, respectively. However, Fleming did not last long, with E.J. Sugars taking the position. Sugars and Dillon departed from the band, with Brendan Hengle and Chris Owens taking the respective placements within the band. However, Owens did not last long; Hengle took over the Bassist position for the studio recordings.

On April 26, 2011, the band released their sophomore album, Dissimulation through Facedown Records, the parent label of Strike First.[9] On March 19, 2013, the band released their third album, Aletheia through Facedown. Following the album's release, Hengle departed from the band temporarily, with The Burial Drummer Kaleb Luebchow taking up the mantle of HFTD Drummer. By 2014, Hengle returned to the band, reclaiming his position as Drummer and Bassist. On March 4, 2016, the band released their fourth album, Legacy.[10][11][12] The album featured guest appearances by Jason Wisdom (ex-Becoming the Archetype, Solamors, Death Therapy) and Shane Oschner (Hands, Everything in Slow Motion), as well as guest musicians Elisha Mullins (The Burial, Fleshkiller) and Sean "Shred" Maier (ex-Blessed by a Broken Heart).[11][13] 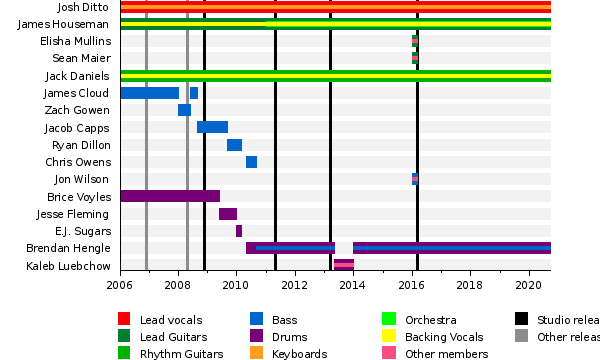 Retrieved from "https://christian-metal.fandom.com/wiki/Hope_for_the_Dying?oldid=3029"
Community content is available under CC-BY-SA unless otherwise noted.