For Today was a metalcore band that was based out of Sioux Falls, Iowa in the United States. The band formed in 2005, but broke up in 2016.[1] The band was an extremely well known band, especially upon Mattie Montgomery's inception into the band in 2007. The band was known heavily for their preaching of love and Christianity and was considered one of the best bands in the Christian Heavy metal realm.[2]

For Today began in 2005, being formed by Ryan Leitru on Lead Guitars and Clean Vocals. Mike Reynolds, Jon Lauters and David Morrison all were a part of the original lineup, performing Rhythm Guitars, Bass and Drums and Unclean Vocals respectively. Lauters departed and was replaced by Brennan Schaeuble. However, he too departed shortly after. Leitru hired his brother, Brandon to take over Bass. In 2006, Matt Tyler joined on Vocals and following his induction, the band recorded an EP, titled Your Moment, Your Life, Your Time, which they released independently.

In 2007, Tyler departed from the band. The band then hired Mattie Montgomery, the former Vocalist of Besieged, a band that signed to Blood & Ink Records.[3] Montgomery moved from Michigan to Sioux Falls, Iowa, where the band was located, and began to record with them. The band recorded Ekklesia in 2007, and by January 2008, the band signed to Facedown Records.[4] The album was released through the label on April 1, 2008.[4] In September of that year, while on tour with Too Pure to Die,[5] the band were involved in a car accident.[6] In 2008, the band toured with Too Pure To Die, Means, Life in Your Way, Burden of a Day, Kingston Falls, Liferuiner, This or the Apocalypse, My Hero is Me, WDHR, Dr. Acula, Sworn Enemy, MyChildren MyBride, The Ghost Inside, and Broadcast the Nightmare.[7]

In February 2009, the band announced that they were working on their sophomore album, Portraits.[8] The album came out on June 9, 2009. The band continued touring and working on new music, hitting dates with Sleeping Giant, Saving Grace, A Plea for Purging and also hitting the Scream the Prayer Tour in 2009 and 2010, hitting dates with Haste the Day, The Chariot, Project 86, Oh Sleeper, Gwen Stacey, Agraceful, Corpus Christi, Maylene and the Sons of Disaster, Blessed by a Broken Heart, The Color Morale, The Crimson Armada, I the Breather, The Great Commission, Hundredth, and In the Midst of Lions.[9][10] In 2010, the band began to work on Breaker, the band's third album, which came out on August 31, 2010.

In 2012, the band released their fourth album, Immortal, which featured Sonny Sandoval of P.O.D., Tommy Green of Sleeping Giant and XDEATHSTARX, and Jake Luhrs of August Burns Red on the album, which marked their first album to not come out through Facedown Records. Instead, the band had switched to Razor & Tie Records, a label that previously focused on pop music, but starting to sign metal bands including Nonpoint, Norma Jean and All the Remains. The band, following the album's release, performed on Warped Tour 2012.[11] On June 15, 2012, Morrison announced his departure from the band to do missionary work in South America with Extreme Nazarene Ministries.[12] David Puckett, formerly of The Crimson Armada, took over the position.[13]

In January 2013, Reynolds was let go from the band, after he made some "controversial" statements, only days before. The statements pertaining to homosexual Christians, stating that "there is no such thing as a gay Christian".[14][15][16] Once Reynolds was kicked out, the band hired Sam Penner, former In the Midst of Lions Guitarist, to perform on Rhythm Guitars.[14] Montgomery, the Leitrus, Puckett and Penner then embarked on a tour, alongside As I Lay Dying and The Devil Wears Prada.[17] During the tour, in February, the band's van and trailer was stolen.[18] That year, despite the backlash from Reynold's comments, the band performed several festivals, including Lone Star Metal Festival, Ohio Metalfest, Wisconsin Metalfest, and was announced to play South By So What?! Fest in 2014.[7] However, Montgomery stated that the band were not aloud to play in Europe, due to Reynolds' comments.[19] In 2014, the band put out an album titled Fight the Silence, which was the first release to feature both Puckett and Penner.

Following the album's release, the band continued to tour. However, on March 22, 2015, Penner flew home because of a medical emergency in his family, which is when he received a phone call from the band, where they told him it would be better for him to not continue with the band.[20][21] Penner departed from the band, angrily, but nonetheless departed.

Once Penner departed from the band, Jim Hughes of Colossus took over the Rhythm Guitarist position. The band recorded their newest album, titled Wake, which was revealed in an interview with Montgomery earlier that year.[19] However, the release did not feature Hughes on the album, with Ryan Leitru handling all Guitars. On July 5, 2016, the band announced that they were disbanding.[1] The band played a long farewell tour which ended on December 11, 2016, with the final lineup of Montgomery, the Leitru brothers, Puckett and Hughes. Montgomery went on to become a traveling speaker and minister and author, while the Leitru brothers formed a supergroup called Nothing Left, featuring themselves, Danon Saylor (A Bullet for Pretty Boy), Alex Camarena (Silent Planet) and later Devin Henderson (Take It Back!). Puckett, in 2017, joined We Came As Romans as their official drummer.

In 2018, Montgomery, the Leitru brothers, Hughes, and Puckett reunited on stage once again as For Today on October 28th in Detriot, Michigan. The band reunited for a memorial show for Kyle Pavone, who had fronted We Came As Romans until he passed away.[22][23] However, they stated it would not be a reunion show and they would not be getting back together and that they wanted to honor their friend.[23] 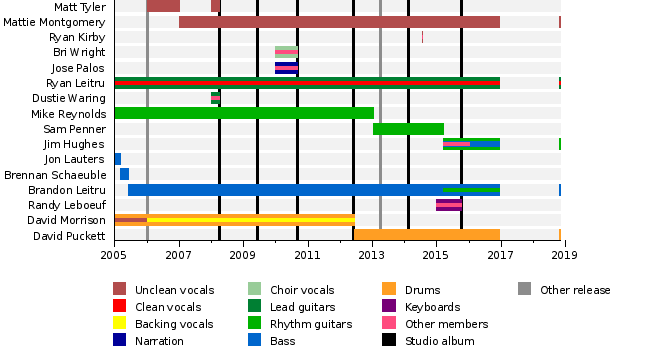 Retrieved from "https://christian-metal.fandom.com/wiki/For_Today?oldid=1246"
Community content is available under CC-BY-SA unless otherwise noted.