Demon Hunter is a metal band from Seattle, Washington. The band began in 2000 with brothers Ryan and Don Clark, after departing from Training For Utopia. However, Don departed, leaving Ryan the only original member. As of 2010, the band has sold over half a million albums. While known for a nu-metal/metalcore style, the band has been shifting more into a melodic metal/alternative metal band.

Demon Hunter was initially created as a potential project for Ryan and Don Clark, after departing from Training For Utopia.[1] Ryan had also performed in a metalcore/hardcore band Focal Point, while Don was apart of Offset.[2][3]

Demon Hunter first appeared on This Is Solid State Volume 3 with the song "Through the Black", with the lineup of Ryan, Don and Jesse Smith on drums.[4][5] Their self-titled album was released through Solid State Records in October 2002. Ryan and Don recorded all the instruments, save for drums, who they recruited Jesse Sprinkle (Poor Old Lou, Morella's Forest) for.

At first, the members of Demon Hunter attempted to obscure their names and identities from the media,[5] using the names Sgt. Serpent, Chuck Knuckles, Utah Biggs, Arm, and John Gredal.[6] Brandon Ebel, founder of Tooth & Nail Records would also appear in some of the original band photos.[5] The band's names were revealed when they embarked on their first official tour, going with Extol and metalcore youngbloods The Agony Scene.[5][7] The tour saw the official adding Sprinkle on drums, Kris McCaddon (Embodyment, Society's Finest) on guitars and Jon Dunn on bass.

Demon Hunter returned to the studio to record their sophomore album, Summer of Darkness, which had Dunn and McCaddon contributing for the first time. The album was released on May 4, 2004 and was a modest success, propelling Demon Hunter into the secular market with their second music video, "Not Ready to Die" appearing on MTV2's Headbanger's Ball.[8][9] "My Heartstrings Come Undone" also appeared on the Resident Evil: Apocalypse soundtrack. The album featured four guest vocalists - Mike Williams of The Agony Scene, Brock Ludlow of 36 Crazyfists, Howard Jones of Killswitch Engage and Trevor McNevan of Thousand Foot Krutch.[10] The band hit the road with a new touring drummer, Timothy "Yogi" Watts of The Lonely Hearts and Holland, as Sprinkle could not go on tour. The band took Dead Poetic and Haste the Day on tour, with Staple replacing Haste the Day towards the end of the tour

In 2005, the band returned to The Compound, a recording studio in Seattle, to record their third album, titled The Triptych. The word "triptych" centers around the concept of three, as it was their third album, as well as signifying the trinity. The album had a cover of Prong's song, "Snap Your Fingers, Snap Your Neck". By this point, Watts had officially joined the band, with his work debuting on this album, as Sprinkle had departed, alongside McCaddon. Ethan Luck would take over his position. The album was considered better that their previous release, selling double in the first week. "Undying" was the album's debut single, with a music video directed by Chris Sims. In 2006, the band embarked on a single tour with Zao, Becoming the Archetype, August Burns Red and Spoken.[11] The band shot a video for "One Thousand Apologies", directed by Darren Doane over the course of tour. The Triptych was re-released with a DVD and four additional tracks on October 31, 2006.

In December 2006, Ryan was featured in Revolver Magazine, as one of "The Holy Alliance", which consisted of Spencer Chamberlain (Underoath), Tim Lambesis (As I Lay Dying) and Cory Brandan Putman (Norma Jean), in an article about Christian metal.[12] The band once again entered the studio in June 2007 to record their fourth album, Storm the Gates of Hell which came out in November the same year. "Fading Away", the album's single, was well received. "Carry Me Down", another single from the album, was placed on Headbanger's Ball.

In 2008, the band headlined the Stronger Than Hell tour, which began on May 26th in Seattle. The tour featured the reunited godfathers of Christian metal, Living Sacrifice, Oh, Sleeper, The Famine and Advent. The tour ended on July 5, 2008 at Cornerstone Festival. The band released a box set titled 45 Days with two DVDs and a CD with a documentary film about the band and their fans. The set was filmed by Cale Glendening.

A live album, which followed the release of 45 Days, titled Live in Nashville, was released on January 27, 2009. The DVD included 14 songs from their set during the Stronger Than Hell tour. The album featured Patrick Judge on Lead Guitars, as Luck was unable to join the band on tour full-time, due to his conflicting schedule with drumming for Relient K. Judge had previously performed guitars live with Bleeding Through, filling in for Brian Leppke.

On September 1, 2009, Don and Luck departed from the band, due to work with Invisible Creature and Relient K.[13] Judge officially took over as Lead Guitarist, with longtime friend, Randy Torres, formerly of Project 86, fill in on Rhythm Guitars for a brief time.[14] Ryan Helm (ex-The Ascendicate) would officially take over later on the Rhythm Guitarist position. The band released their fifth album, The World is a Thorn in 2010. The album debut at 39 on the Billboard 200. The band then joined As I Lay Dying on tour, marking Demon Hunter's debut tour as a supporting act over a headliner. The band released an anthology album titled Death, A Destination in 2011. In December 2011, Helm officially departed from the band to focus on his new project Damien Deadson.[15]

In January of 2012, it was announced that Jeremiah Scott (The Showdown, ex-Destroy Destroy Destroy) would perform Rhythm Guitars in the band.[16] In April, the album True Defiance was released. The album was a commercial success, ranking 36 on the Billboard Charts and received generally positive mixed reviews. In July, the band went on tour with Bleeding Through, Cancer Bats and The Plot in You. The band also announced tour dates in Brazil, Columbia and Argentina in South America.

The band embarked on their debut tour of 2013, titled Another Day, Another Tour alongside In Flames, Battlecross and All Shall Perish.[17] Demon Hunter then began teasing their new album, which was revealed to be titled Extremist. Demon Hunter released three singles - "Artificial Light", "The Last One Alive" and "I Will Fail You" - with Extremist finally being released in full on March 18, 2014. The album debuted at 16 on the Billboard Charts. The album was their biggest release, as it was 20 charts higher than True Defiance which ranked at 36. In August of 2014, the band went on a short tour with fellow Christian metal acts Red and Veridia.[18] The band's only concert of 2015 took place at Uprise Festival at Pennsylvania.[19]

In March 2017, the band debuted their eighth studio album, Outlive. The band had previously teased the album with tracks "Cold Winter Sun" and "Died in my Sleep". While Outlive did not rank as high as Extremist, it is their second highest ranking album, ranking at 25 on the Billboard Charts.

On December 3, 2018, the band announced the releases of two new albums, titled War and Peace, which were both set to be released on March 1, 2019, both featuring ten official tracks and each an additional track for the deluxe editions.[20] 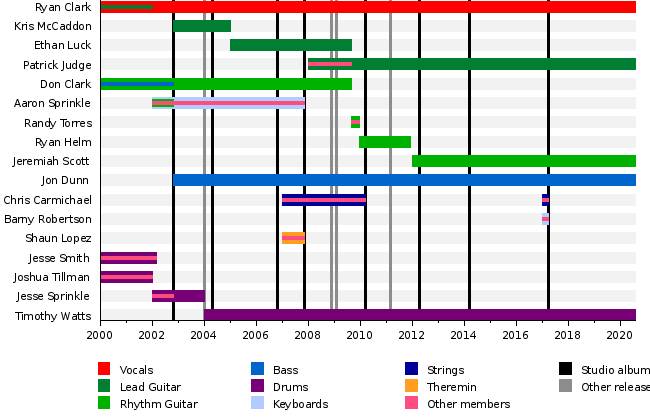 Retrieved from "https://christian-metal.fandom.com/wiki/Demon_Hunter?oldid=2881"
Community content is available under CC-BY-SA unless otherwise noted.