Deliverance, also known as Big D, is a Thrash metal/Speed metal band that began in 1985. The band began in Los Angeles, California. The lineup has gone through several lineups, with Jimmy P. Brown II being the only remaining member throughout each. The band's current lineup consists of Brown on Rhythm Guitars and Vocals, Glenn Rogers on Lead Guitars, Manny Morales on Bass and Jim Chaffin on Drums.

Deliverance formed in the year 1985, as a speed metal band. The band began with the lineup of Jimmy P. Brown II on Vocals and Rhythm Guitars, Alan Bostwick on Bass, Rick Hawksinger on Lead Guitars and Chris Hyde on Drums.

After Bassist Alan Bostwick and Lead Guitarist Rick Hawksinger departed from the band, the band hired Immanuel F. Morales and Larry Farkas. However, Morales departed and was replaced by Brian Khairullah. The band remained with this lineup unttill Farkas departed and formed Vengeance Rising with Doug Thieme and Roger Dale Martin.[1] The band continued on as a three-piece. The band's first appearance being apart of the California Metal, which featured the band, Barren Cross, Guardian (misspelled Gardian), Neon Cross and Hero.[2] Glenn Rogers of Hero joined the band, replacing Farkas on lead guitars.

With the same lineup, the band recorded their self-titled debut album in 1989, released via Frontline Records. The band would then be featured on the Hot Metal Summer II with the track "If You Will", which also featured a recorded interview.

During the production of what became their third album, What a Joke, Khairullah, Hyde and Rogers departed the band and were replaced by Mike Grato (Recon), Kevin Lee and George Ochoa (Recon). The album did not do very well. According to an interview with Brown in 2016, the band did this intentionally to get off of Frontline Records. However, the label found out and forced them to record four more albums.[3][4]

"I got tired of being labeled 'Oh, there's Deliverance.... the Metallica clones are back.' You know, that got really old. Because in a sense we were kind of ripping them off. But I definitely know that the Lord wants us to be original. I want to be original. So I think it was time." ― Jimmy P. Brown II on HM Magazine

The band's fourth album, Stay of Execution, went in a progressive metal genre, with new guitarist Michael Phillips (The Sacrificed, Sacred Warrior), which changed the band musically for a long time. Brown explained his stance on the musical change with Doug Van Pelt (Lust Control), founder of HM Magazine. While fans were extremely angered at the time,[3][4] many now feel it is some of their best material.

The band's next album, Learn, continued the progressive metal stage of the the band, featuring Morales on bass once again and new Lead Guitarist/Keyboardist Jonathan Maddux. After this the band's drummers and guitarists began to flux. However, Morales and Brown remained the core of the band. The band released two more albums, River Disturbance and Camelot in Smithereens. After the release of the two albums - one of their most successful, followed by their least successful - the band disbanded in January 1996.[5] Brown ended the band, as he began coming bitter towards the industry, and Morales and Jeff Mason of Betrayal, who played drums for a year, performing on Camelot, needed a break as well.[5]

After disbanding in January 1996, the band went their separate ways until they reunited in 2000 with the lineup of Brown and Khairullah and Lael Clark on Lead Guitars. The band hired Justin DeTie and Jim Calvert to perform additional guitars and drums. The band, however, went through a major lineup change in 2001, with all the members save Brown and Clark departing. Morales re-joined the band once again, recommending Jesse Rivera as their drummer. However, Rivera did not perform with the band, being replaced by Ian Baird. The band, over this brief reunion between 2000-2002, released two compilation albums, a live album and a new album, titled Assimilation, which followed more of an electronic/industrial metal style.

The band disappeared on a hiatus until 2006, resurfacing the What a Joke lineup, minus Grato and having Tim Kronyak on Bass. However, Lee decided not to continue, being replaced by Mike Reed. In 2007, the band released an album titled As Above - So Below.[6] The band's discography also had a few re-releases of their old material in the year. Corin Jae Scott had also played Keyboards over the course of the reunion. The album mixed several different elements from the last several albums.

In 2010, the band announced they would release an album, titled The Annals of Subterfuge, which would mark the band's 25th anniversary. The lineup was unclear at the time, beyond Brown and Phillips. However, the album was never released. The band played a single show in 2010, over the course of October 28-30th, with the only show to be played without Brown and having Eli Prinsen of Sacred Warrior and The Sacrificed perform vocals at NordicFest.[7]

On May 20, 2011, Phillips announced the band would be finally coming to an end and would play their final show in August 2011.[8] However, despite this, by July 2012, the band reunited[9] and begun working on new material.[10][11] However, despite the reports of the album being their final, Brown stated that it most likely would not be.[4] After the album, Hear What I Say! came out in 2013, with the lineup of Brown, Phillips, Morales and Jayson Sherlock of Mortification, Paramaecium and Horde on Drums, the band went on a sort of hiatus, with Brown reuniting the band the next year with himself, Ochoa, Jim Chaffin returning several years later on the Drums and the former Bassist of Tourniquet, Victor Macias.

The band played their first reunion show in 2016, at Exodo Fest with bands such as Abated Mass of Flesh and Silent Planet.[12] In 2017, the band's two first releases were repressed on vinyl and released through Roxx Records and Bombwork Records. In 2017, Ochoa departed the band, as he was performing with his band Worldview and due to some inner conflicts with the other members, which they have now reconciled.[13] In the meantime, the band hired Greg Minier (ex-The Crucified) to record the guitars on the album.[14][15] Later on in the year, Rogers returned to the band and recorded the solos on the upcoming album.[14][15] The band signed to Roxx Records once again and 3Frogz Records (Brown's label and recording studio), which released the band's album, The Subversive Kind on February 23, 2018.[16] On October 28, 2017, the band released "The Black Hand" and a lyric video to go along with it.[17] The track would also be apart of the Metal From The Dragon Vol. 2 compilation.[18] In 2018, the band was scheduled to perform at the Rock Alive Festival, however, the band had to cancel.[19] Brown released a video, explaining why the band would not be able to perform.[20] The band would continue on, however, in February 2020, Macias departed from the band, with Morales returning to the lineup. 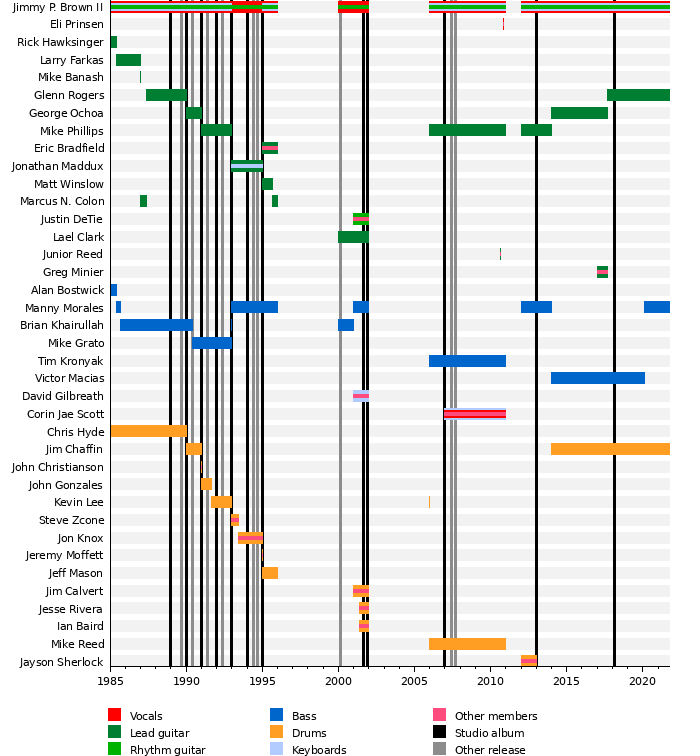