Death Requisite is a symphonic death metal band that began in 1998, formed by Dave Blackmore, Trevor, and Marcus. The band currently only consists of Blackmore, longtime Drummer William Lee and Guitarist Joseph Moria.

The band has released two studio full-length albums and five EPs. When the band reformed in 2010, they described their musical style as blackened symphonic melodic technical death metal, or extreme hybrid metal.[1]

Death Requisite formed in 1998 as the brainchild of Dave "DJ" Blackmore. He hired Marcus and Trevor on Vocals and Rhythm Guitars respectively, while he performed Lead Guitars. Trevor, temporarily took over Bass duties as well. In 1999, the band hired Josh on Drums and Jon on Bass, which allowed Trevor to return to Rhythm Guitar duties solely. In 2000, the band recorded their first demo, which was never released. Following that, the band hired Dennis as an experiment with trying out a two-vocalist approach, rather than the traditional one. With this lineup, the band recorded Living Sanctuary. Dennis performed a few shows with the band before departing and Marcus departed afterward. Matthew joined as the Third Guitarist in late 2000. Marcus returned to the band as their Vocalist for a brief period to record a Christmas song - "Child Messiah" - for the compilation album, A Brutal Christmas: The Season in Chaos, which was released through Sound of the Dead Records.[2]

Lineup-changes, From Life to Death, Thanatopsis and Indefinite Hiatus (2001-2005) Edit

However, Marcus departed after the song was recorded. In 2001, Matthew departed, having only been in the band for under a year, as well as Josh. William Lee, a friend of Josh's, took over the position. At this point, Trevor abandoned Rhythm Guitars and took up the Vocalist position. With the lineup, the band recorded From Life to Death. Following the release, however, in 2002, Trevor and Jon both departed from the group. Gomez and Thadius took over the Bass and Rhythm Guitars respectively, while Jamon Dane filled in on Vocals as need be.

In 2003, the band began to write new songs and perform them live. The songs caught the attention of a fan, who then in turn recorded them, while they performed. The fan released the bootlegged tracks, now known as the Thanatopsis. JDA Records, the band's label, got a hold of the release and released it officially, though the band never officially recorded the tracks in studio. Dane departed from his fill in position at this point, with an additional fill-in taking over for only a brief time. In 2005, the band went on hiatus.

In 2010, the band reunited, with Blackmore and Lee coming back together, alongside new members Tyrannus (Vocals) and Cuinn Griffen (Bass). The next year, the band recorded a three-song EP, Prophets of Doom, with longtime friend Kelly Scott Nunn (ex-Underoath, ex-Maylene and the Sons of Disaster, ex-Sleeping by the Riverside) as the Producer. In 2012, the band recorded and released Second Death in 2013, with the same lineup. Tyrannus, however, departed once the EP was recorded, and was replaced by Vincent St. James Clerval. The same year, Joseph "Joey" Gerena joined the band. In 2014, the band saw Griffen's departure and Regnal the Just's induction as the Bassist.

In 2015, the band began to write for their sophomore long-awaited album, Revisitation. The band recorded their tracks as a demo, and began to pre-release it. However, during the recording process, Blackmore was involved in a serious car accident, resulting in a traumatic brain injury. The injury set the band back a year, and Regnal departed the band in 2016. Gabriel Blackmore, Blackmore's son, took over the Bass position.[3] In June 2016, the band signed with Rottweiler Records, home to bands such as Soul Embraced, Immortal Souls and Grave Robber.[4][5] The band, preparing to release Revisitation officially, received reviews from several notable musicians, including Kevin Tubby (Broken Flesh, ex-Death List, ex-Evisceration, ex-Obliteration), Michael Cook (A Hill to Die Upon, Maugrim), and Kelly Schaefer (Atheist).[6] The album was released on November 25, 2016.[7] In 2017, the band revealed they were working on new material, along with Johanna Fincher. However, Vincent St. James announced his official departure around this time.[8]

The band later announced that Vincent St. James, Tyrannus, Fincher and James Lewis (Nomdvic) would be performing on their next release. On May 10, 2018, the band released all the information about the album, including the title; Thernody. The EP was released on June 29, 2018 and was well received. The band performed live with the lineup Blackmore, Lee, Fincher, Gabriel, James and Logan Thompson of Symphony of Heaven at Audiofeed 2018. Gerena came back to perform with the band as an unofficial last show, as he had departed earlier, before Thernody began to be recorded, at Forerunner Fest on August 25, 2018. 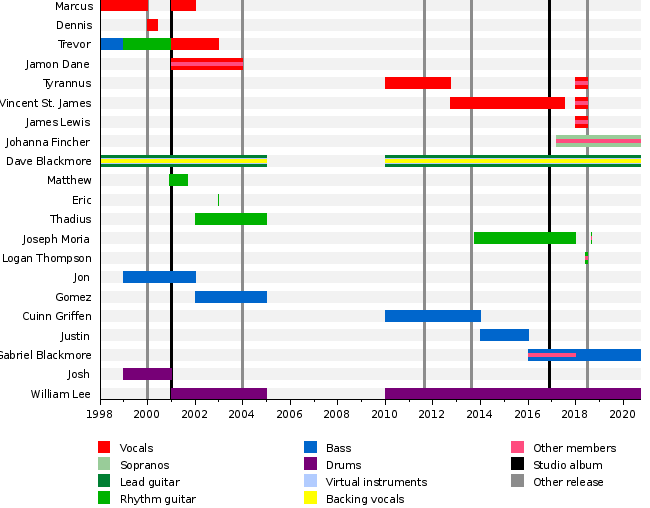 Retrieved from "https://christian-metal.fandom.com/wiki/Death_Requisite?oldid=1106"
Community content is available under CC-BY-SA unless otherwise noted.