Believer is an experimental thrash metal band from Colebrook Township, Pennsylvania in the United States. The band began in 1985 as the band Deceiver until 1986. The band has two remaining original members - Kurt Bachman and Joey Daub.

Believer began in 1985 as the band Deceiver, with founding members Kurt Bachman (vocals/guitars) and Joey Daub (drums). The band was joined by Howe Kraft (bass) and David Baddorf (guitars). The band began playing melodic metal with their demo, The Return.

Their style at this time was similar to Metallica or Megadeth. Later, the band changed their style to more thrash-oriented then they previously were.[2]

In High School, Bachman met Scott Laird, who was studying his first years a music instructor. When Believer was recording the title track for its studio album, the band asked Laird to compose an orchestral intro for the song.[2] In 1989, the band signed to R.E.X. Records which published Believer's first album which was recorded the same year, titled Extraction from Mortality.[3]

Believer became one of the biggest extreme Christian metal bands, alongside Vengeance Rising, Deliverance and Tourniquet.[4] The band's song "Not Even One" was featured on a Roadrunner Records sampler, which subsequently got them signed to the label.[5]

In 1990, Howe Kraft departed from the band, being replaced by Wyatt Robinson. With this lineup, the band recorded their second album, Sanity Obscure. Scott Laird was also officially apart of the lineup.[6] His sister, Julianne Laird Hoge, sung soprano on the song "Dies Irae (Day of Wrath)". The album also featured an anti-pollution song titled "Nonpoint", which the nu-metal/hard rock band Nonpoint is named after.[7] The album became more popular than their debut, which resulted with the band playing shows with Bolt Thrower and Sacrifice.[8] Believer, alongside Pestilence and Cynic were featured on a split album together titled The Breed Beyond.[9]

Robinson and Baddorf departed from the band, before the band began recording their third album. After their departure, Jim Winters joined as bassist, while also splitting guitar duties with Bachman. In 1993, the band recorded their third album, Dimensions. Daub performed on an electric drum kit on the album.[10] Bachman's other band, Under Midnight influenced some of the more industrial sounds on the album. The lyrics deal with the philosophical paradoxes and the ponderings of Sigmund Freud, Thomas J. J. Altizer, Ludwig Feuerbach and Jean-Paul Sartre about the existence of God. "Trilogy of Knowledge”, divided into three chapters and an intro, is a 20 minute+ epic written around the biblical story of the life of Christ and the knowledge of good and evil, which features Laird heavily.

After the album was released, the band went on a hiatus. The next year, the band consisting of Bachman, Daub and Winters, mutually agreed to disband. Bachman primarily went to work on his doctorate, while Daub started to beginning cycling, endorsed by Deluxx Bikes, while Winters joined Starkweather and Earth Crisis. Daub and Bachman formed a recording studio titled Trauma Studios. Daub and Bachman also recorded Living Sacrifice's album, Inhabit.[11] The two also produced Turmoil in the studio. In the late 1990s, Daub formed a band with former Sacrament members titled Fountain of Tears.

In 2005, Joey Daub wrote on his personal site that he and Bachman were working on new material for Believer.[12] The article was heavily reported on, especially by Blabbermouth.net,[13] who referred to the band as a "much missed late 80s and early 90s technical thrash metal band".[14] In an interview, Bachman explained that he moved closer to Daub. While recording a new Fountain of Tears album, Bachman and Daub began messing around with some new material.[15]

The band began working on an album and completed pre-production of new songs during November 2007. The band's entire catalogue was re-released via the Polish label Metal Mind Productions. Blabbermouth.net heavily covered the process of the album's recording, with the process beginning on November 24th,[16] the drums were completed on December 30th,[17] bass was finished on January 28, 2008,[18] rhythm guitars were completed on February 18,[19] and on April 7, it was announced that some special guests would perform on the album.[20] On May 18, the band's final vocal process was announced to be finished.[21]

On November 18, 2008, Blabbermouth.net, once again, reported on Believer, announcing their signing to Cesspool Recordings, an imprint of Metal Blade Records, which is owned by Howard Jones (Killswitch Engage).[22] The band got in contact with Jones, due to a recommendation of a Blabbermouth employee, when they discovered that Jones was a fan of the band.[15] They then signed a three-album deal with Metal Blade.[15] The band then released their first release since their return; Gabriel on March 17, 2009. The album's lineup consisted of Bachman, Daub, Jeff King on keyboards (Fountain of Tears), Kevin Leaman on guitars, and Elton Nestler on bass, with former members Scott Laird, Jim Winters and William Keller (who narrated on Dimensions)[23] performing additional performances to the album. The band would play their first shows in 2009 since their breakup.[24]

On August 15, 2010, the band announced they began writing their follow up to Gabriel. Bachman again stated that the songs would be quite different.[25] Recording was completed by December 8th. The band stated they were going back to a more Dimensions' style - utilizing more layered guitars, keys and melody, while also bringing forth more varied vocal arrangements. However, it was assured that the band would still have the semblance sound.[26] The album, which was titled Transhuman, was released on April 11, 2011. While proclaimed by few as more genre-defying and experimental than band's previous efforts,[27] others were not as happy with album,[28] including Kevin Leaman of the band.[29]

In 2016, Leaman reported that the band was no longer apart of Metal Blade Records, but were preparing to release new material independently.[29] The band then announced they would be releasing the music in sets of two drawn out over five EPs, beginning with 1 of 5, which came out on March 18, 2017.[30] 2 of 5 followed the EP only three months later, being released on July 10, 2017 and being heavily promoted.[31][32] 3 of 5 was the final release of 2017 from the band, being released on October 31st.[33] The album cover was considered controversial,[34][35] however neither the artist nor band intended it to be taken in that light, apologizing to the fans who disliked it. 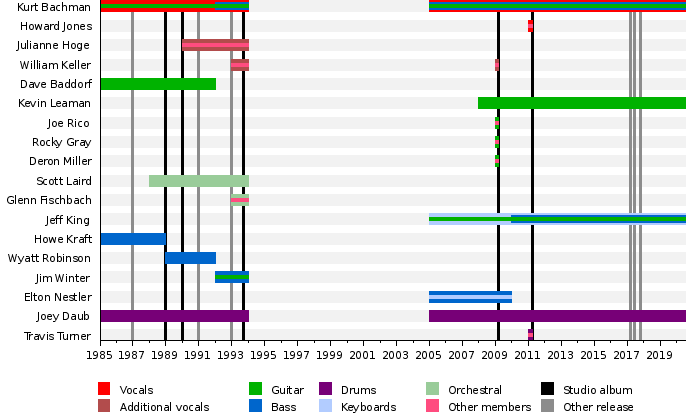 Retrieved from "https://christian-metal.fandom.com/wiki/Believer_(Pennsylvania)?oldid=3067"
Community content is available under CC-BY-SA unless otherwise noted.