Becoming the Archetype are a technical death metal band that began in 1999 under the name Nonexistent Failure until 2003, when they changed their name to The Remnant and finally in 2004, to their current moniker.

The band's second vocalist departed from the band before they recorded a demo. In 2001, the band recorded their debut demo, titled In Loving Memory of Everything..I Never Had, which came out in 2002. Before joining Solid State Records, the band changed their name to The Remnant and released a self-titled album under the same name.[1]

The band were approached by Demon Hunter at Cornerstone Festival in 2004 (over July 4th Weekend), who told the band to change their name, as there was punk band named The Remnants. The band then came up with Becoming the Archetype, which Wisdom came up with.[1][2]

In February 2004, the band embarked on a tour with The Showdown and Mortal Treason.[3] Showbread was also present, as well as Point Zero, now known as War of Ages.[1]

In December 2004, the group officially signed to Solid State Records and released their first nationwide album, Terminate Damnation, which was derived from the song by Mortification. The album blended elements of progressive death metal and metalcore.[4] On May 26, 2005, the band performed a show with Extol and The Showdown.[5]

In 2006, founding lead guitarist Jon Star departed from the band on good terms, for personal reasons. In May, the band's debut was re-released on vinyl via Broken Circle Records, only pressing 500 copies.[6] June 15-17, the band played shows with Demon Hunter, Zao, August Burns Red and Spoken.[5][7] On August 2, the band played a show with Himsa, Demiricous, Parkway Drive and Hell Promise.[5]

The band went on a 24-date tour in November 2006, in Europe, with Shaped by Fate and The Chariot, with their new guitarist, Alex Kenis of Aletheian fame.[8] In July 2006, Sean Cunningham departed the band to finish his final semester in college. During the summer, the band performed on tour with Crimson Moonlight and Aletheian. Carrying on, in the fall of 2006, the band went into the studio with Andreas Magnusson (The Agony Scene, Scarlet, The Black Dahlia Murder), with the album, titled The Physics of Fire, being released on May 8, 2007.[9] The band promoted the album, via their tours titled The Trilogy of Hairs, which were known as Bring Your Own Beard Tour, Peel Your Wig Back Tour, and the Born With a Mustache Tour.

The bearded skull artwork for the Bring Your Own Beard Tour became known as the band's mascot, which was nicknamed "Clifton". It was named after Travis Turner, formerly of Aletheian, whose birth name is Clifton Travis Turner.[10] In 2007, Duckett took an indefinite hiatus from the band. Turner was subsequently asked to take over, to which he agreed.[10]

In 2008, there were some important personnel changes; Kenis departed from the band,[11] mostly because of the location that they were recording the album,[12] and also to work on new material with Aletheian.[13] Turner also departed, mostly due to work and his family.[10] The band embarked on the Peel Your Wig Back Tour with Beneath the Sky, Sea of Treachery and Afterimage.[14] The band revealed the artwork and track listing for their third upcoming album, Dichotomy.[15]

The band would then hire Brandon Lopez on drums of the brutal death metal band Broken Flesh. The band would release the album in November of 2008, with production done by Devin Townsend of Strapping Young Lad. The album is conceptually sculpted around C.S. Lewis' Space Trilogy.[16] The song "Ransom" is also centered around the main character of the series.[16] On October 31, 2008, Duckett returned to the band. In October 2009, the band's debut non-album single, "Necrotizing Faciitis", was released with "Clifton" returning on the artwork.[7]

In 2010, Star departed once again, being replaced by Daniel Gailey. Gailey had previously played in a Christian deathcore band called Thaddeus, but knew the band because Gailey and Duckett had worked together.[17] After Gailey's addition into the band, they recorded their fourth album, Celestial Completion, with a more progressive style than previous albums, incorporation tablas, tambura and soprano vocals.[18]

On February 9, 2011, the band revealed the artwork for the album.[19][20] On March 21, the band premiered "Path of the Beam".[21] On March 29, the band released a new music video for "The Magnetic Sky", which featured a very keyboard/digital-driven style.[22] In April, the band performed a show at the Aquifer in Clinton, New Jersey.[5] In June, the band played with Inhale Exhale and To Speak of Wolves.[5]

In September, the band embarked on tour with Immortal Souls and Beyond the Dust.[23] The band also went on tour with Creations and The Tug Fork River Band.[24] By November, Duckett and Wisdom both departed from the band - Wisdom because of the upcoming birth of his first child and Duckett unspecified reasons.[25] For live shows after Wisdom and Duck's departure, Chris McCane, formerly of Thaddeus alongside Gailey, took the vocal position, while Bradley Riggs (The Overseer) took over Bass. Abishai Collingsworth (The Overseer, Wolves at the Gate) performed Drums for the tour.

I Am, Hiatus and Potential New Album (2012-present) Edit

McCane officially joined the band in 2012, with Michael McCellan joining the band on Drums.[26] McCellan did not last long with the band, being swiftly replaced by Chris Heaton.[27] Cody Watkins took over the Bassist position officially the same year. The drum tracking began on May 20, 2012.[28] Over the course of the weekend of June 20-23rd, the band played Icthus Festival with several bands, including Sleeping Giant, Onward to Olympas and A Plea for Purging.[5]

The band recorded their fifth album, I Am and released it, receiving mixed reviews.[29][30] Hecox stated that he and Gailey had written the entire albums.[31] October 23, 2012, the band released a competition where a fan could win selected items from the band.[32] On August 3-4th, the band played at two different festivals - Alliance Festival with Norma Jean, The Devil Wears Prada and Maylene & the Sons of Disaster[33] and Intensity Music Fest with Fit For A King, War of Ages, and The Great Commission.[5] After the festival, the band went on a hiatus.[10] Gailey would go on to join Phinehas soon after.[17]

In 2015, band members were interviewed about doing a new album - Hecox revealed that they thought about doing another release, which would probably be the last one.[10] Gailey revealed that he is apart of the current iteration of Becoming the Archetype and that it was not the I Am lineup.[17] Wisdom also stated that the album would be of the original lineup, including Gailey into the fold. However, with life and family matters, the band does not know when they will convene and write a new album. 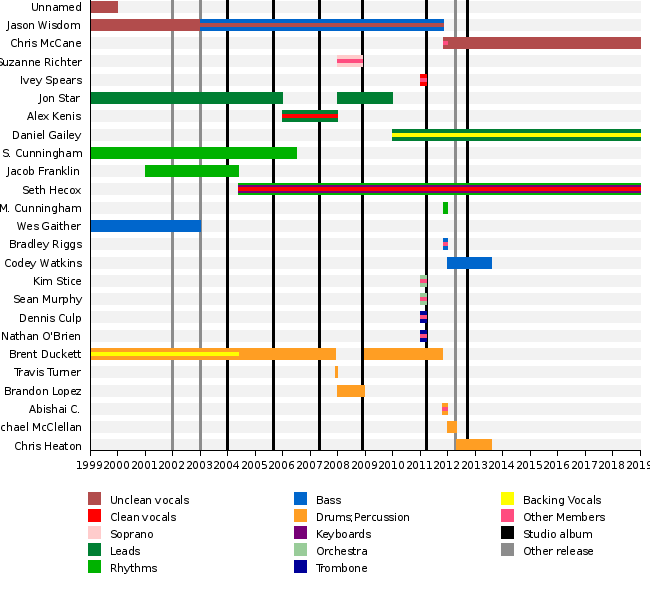 Retrieved from "https://christian-metal.fandom.com/wiki/Becoming_the_Archetype?oldid=2898"
Community content is available under CC-BY-SA unless otherwise noted.