August Burns Red is a melodic metalcore band that began in Lancaster, Pennsylvania in the United States. The band began in 2003. The band currently consists of Vocalist Jake Luhrs, Guitarists JB Brubaker and Brent Rambler, Bassist Dustin Davidson and Drummer Matt Greiner. The band has received two Grammy Nominations for songs "Identity" (2015) and "Invisible Enemy" (2017), under the category of Best Metal Performance.[1][2]

August Burns Red was founded in March 2003 with the lineup of Vocalist Jon Hershey, Lead Guitarist JB Brubaker, Rhythm Guitarist Brent Rambler, Bassist Jordan Tuscan and Drummer Matt Greiner, when most of the members were attending high school and JB was attending college.[3][4] The band would practice in Drummer Matt Greiner's old egg house and later basement on the Greiner family's farmland.[4] After playing several local shows, the band recorded an EP titled Looks Fragile After All with CI Records in 2004.

Hershey quit the band following the recording of the EP, which led Josh McManness to take the position left empty.[5] Hershey went on to create the post-rock band, Bells. Several months later, after getting used to McManness, the band signed with Solid State Records in 2005.[6] The band released Thrill Seeker, their debut studio album, on November 8, 2005. McManness departed from the band in 2006, following the one tour he embarked on.[4] Tuscan also departed from the band, due to similar reasons to McManness. Jake Luhrs and Dustin Davidson filled the respective positions and the band pressed onward.

On June 19, 2007, the band released their sophomore album, Messengers, which was the first release to feature Luhrs and Davidson. The album became the band's breakthrough album, reaching #81 on Billboard 200 Charts.[7] Throughout 2008, the band embarked on tours through North America and Europe. From April to May that year, the band toured with As I Lay Dying and Misery Signals.[8] Later on, in September throughout October, the band embarked on tour with Greeley Estates, A Skylight Drive, Sky Eats Airplane, and This or the Apocalypse.[9]

After these tours, the band recorded two covers of pop songs. They recorded an instrumental version of "Carol of the Bells" for X Christmas, which was featured in "The Spirit", a film released on Christmas 2008. The second song was "Baby One More Time" by Brittney Spears, which came out in 2009. On February 24, 2009, the band released an EP, entitled Lost Messengers: The Outtakes. The EP features B-sides of the album and tracks that did not make it on the album. On March 6, 2009, the band traveled to the Middle East and performed at the Dubai Desert Rock Festival. The band performed a tour in 2009 with All That Remains as well. In June 2009, the music video for "Meddler" was released, as well as singles "Thirty and Seven", "Existence", and "Ocean of Apathy" being released. On June 14, 2009, Constellations was released through Solid State, marking the band's third studio album, coming in at #24 on the Billboard 200.[7]

Another United States tour was organized with the band headlining and supported by Blessthefall, Enter Shikari, All Shall Perish, and Iwrestledabearonce.[10] Following their headlining tour, the band embarked on another tour alongside Architects and Parkway Drive.[11] November and December that year, the band went on a tour with Underoath and Emery.[12] On February 23, 2010, Constellations was nominated for a Dove Award of "Best Rock Album".[13] On July 27, Brubaker stated that the band would be taking time off tour to write their next records.[14]

On September 28, the band released their debut CD/DVD, titled Home.[15] In November that year, the band co-headlined with Bring Me the Horizon on an Alternative Press sponsored tour.[16] August Burns Red toured Australia and New Zealand in December 2010 on the No Sleep Til Festival. The band played alongside Parkway Drive, A Day to Remember, NOFX, Dropkick Murphys, Suicide Silence, Megadeth, Descendents, Gwar, and many others.

On Valentine's Day of 2011 - February 14th - the band entered the studio. In March, the band announced the album was finished being recorded. At that point in time, the album was being mixed. On April 5, 2011, the band revealed the title of the album would be Leveler. On May 16, the band released the track "Empire" as a preview before its release. They later premiered "Internal Cannon", "Divisions", and "Poor Millionaire". On June 21, 2011, the band released Leveler, alongside a deluxe edition, which consisted of four additional songs, including an acoustic version of "Internal Cannon". The album landed at #11 on the Billboard 200 charts.[7] August Burns Red later performed on Van's Warped Tour's main stage that year.[17] The band followed up with a tour of their own, headlining the Leveler Tour in 2012, with Texas in July, Silverstein, I, the Breather and Letlive coming on as supporting acts. Later that year, they performed an European tour with The Devil Wears Prada and Veil of Maya and an American tour with Of Mice & Men and The Color Morale. On October 9, 2012, the band released their debut Holiday album, titled Sleddin' Hill.[18]

On February 3, 2013, the band officially announced they were performing on Warped Tour 2013, alongside Bring Me the Horizon, NeverShoutNever, Black Veil Brides, 3OH!3, Crizzly, and Bowling for Soup.[19] On February 12, August Burns Red announced their next album, Rescue & Restore, which they were entering the studio to record. Brubaker stated that the band intended to:

"...push the boundaries of our genre more than we ever have before. We set out to write a record where every song stands out from the last. There is a lot of ground covered here and a ton of meat to this album. It’s full of odd metered rhythms and breakdowns, unexpected twists and turns, and some of our most technical riffing to date. Each of us have parts that make our heads spin and we have had to practice like crazy to get some of this stuff together. I know we always say this, but this will be our most ambitious album yet." ― JB Brubaker[[source]]

On May 5, they announced that the album would be coming out on June 25, 2013. The album debuted at #9 on the Billboard Charts, coming in higher than their previous album by two points.[7] On August 30, the band announced the release of a documentary DVD titled Foreign & Farewell before the end of the year. Rescue & Restore featured more elements of progressive metal, thrash metal, and even melodic rock. Adam Gray (Texas in July) appears as a guest musician on the album, appearing on "Echoes" and performs a full-kit alongside Greiner.[20] On August 5, the band announced that they had signed with Fearless Records.[21][22]

Via Instagram, the band slowly began to reveal the title of their newest album, which would be revealed to be titled Found in Far Away Places, was announced that the album would be released for pre-order for April 13, 2015, along with "The Wake", the band's first single for the release. Throughout January 22 to March 8, the band embarked on the Frozen Flame Tour, alongside Miss May I, Northlane, Fit for a King, and ERRA, which went across the United States and Canada and was sponsored by Rockstar Energy. On June 29, the album was released, marking the band's debut on Fearless. On December 7, 2015, August Burns Red was nominated for a Grammy Award in the "Best Metal Performance" Category for their single "Identity".[1] The band was nominated alongside Lamb of God, Sevendust, Slipknot, and Ghost, with the final band winning in the end.[23] On July 6, the band announced a headlining tour alongside silent Planet, ERRA, and Make Them Suffer.[24] A few months later, in September, the band announced that Greiner was unable to perform for the seven dates of the tour and that Adam Gray, who had performed on Rescue & Restore, would be filling in.[25]

On November 21, 2016, the band released a teaser for the 10 year anniversary tour for the band's seminal album, Messengers. The band embarked on the tour on January 4, 2017, with Protest the Hero, In Hearts Wake, and '68.[26] On July 26, the band released the name of the new album, Phantom Anthem, while also debuting the release of "Invisible Enemy", the album's single.[27] The album came out on October 6.[27] On November 28, the band was nominated for a second time with the song "Invisible Enemy" being nominated for the same category. Alongside the band, Body Count, Code Orange, Meshuggah, and Mastodon were nominated, with the final band winning the award.[28] The band released Winter Wilderness, an EP featuring many Christmas songs the band had recorded, on November 9, 2018.[29] 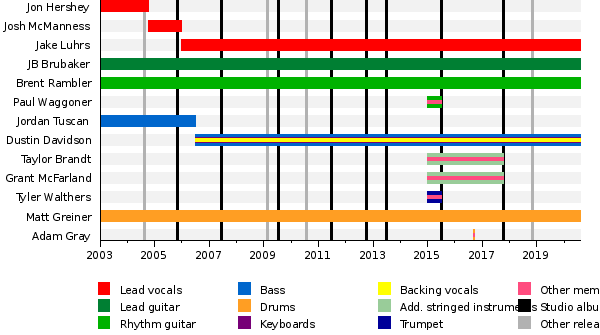 Retrieved from "https://christian-metal.fandom.com/wiki/August_Burns_Red?oldid=2884"
Community content is available under CC-BY-SA unless otherwise noted.