Antidemon formed in 1994, with the lineup of Vocalist Carlos Batista, Lead Guitarist Kleber Albino, Rhythm Guitarist Sergio Gonçalves, Bassist Alexander Cebotorov and Drummer Elke Garzoli. Batista and Garzoli were married at the time. Not too long after forming, Gonçalves and Cebotorov both departed from the band, which led to Batista taking up the Bass. The band then recorded their self-titled demo in 1994.[1] Three years went by before they appear again, recording their sophomore demo, titled Confinamento Eterno in 1997, with their third, Antidemon 4 Anos, coming out the following year.[1]

In 1999, the band debuted their album, titled Demonicido, which was well received.[2] In 2001, the band recorded a split EP titled Barad with another grindcore/death metal band, Zen Garden.[1] Their sophomore album, Anillo de Fuego,[1] which translated, means "Rings of Fire". 2004, 2005 and 2006 each saw a release - Live in Palencia - Spain, Extreme Fest and two splits in 2006, Antidemon / Empty Grave and Underblood Fest Collection Vol. 1 respectively.[1] However, this saw a different lineup after 2005, with Garzoli and Batista getting divorced, Garzoli and Albino departing from the band, Drummer Juliana Batista, Batista's now-wife, and Lead Guitarist Maurício Cebalho joining on, with Wanderlinen Olivereira taking over Drums in-between Garzoli's departure and Juliana's induction.

In 2009, Antidemon had a busy year. With the release of a DVD titled Live in Ecuador, Columbia, Peru & Brazil, followed by their third studio album, Satanichaos and a live album, Anel de Demonichaos Live,[1] the band worked hard, however, Cebalho departed the same year. Luis Oliveira joined the band soon after as their new Lead Guitarist. 2010 saw another split and a DVD being released, both featuring the newly inducted Oliveira - Nordeste Tour Satanichaos and Underblood Fest V respectively.[1]

The band took 2011 off, recording their fourth studio album. The band would then release the album in 2012, Apocalypsenow, which came out through Rowe Productions, the label of Steve Rowe (Mortification). Oliveira departed after the album, with Natã Fornazari filling the role and Marcelo "Soldado" Nejem taking over Rhythm Guitars on tour. Fornazari departed in 2013, with Nejem taking over Lead Guitars on tour. However, before Fornazari's departure, he performed on The Mission DVD. Oliveira joined on as a live Guitarist briefly, before he and Nejem both departed, with the guitarist position being empty once more.

Diego Barrera of Endless Sacrifice joined the band as their Lead Guitarist. However, by the end of 2016, he departed, with Marcelo Alves taking the official position.[1] By 2018, Alves was no longer apart of the group and Lucas Nakano took over. Alves was, however, apart of the Tormenterror DVD, which came out in 2018 via Vision of God Records.[3] Antidemon still perform live in their area, and even minister at Crash Church, where Batista in the Pastor.[4] 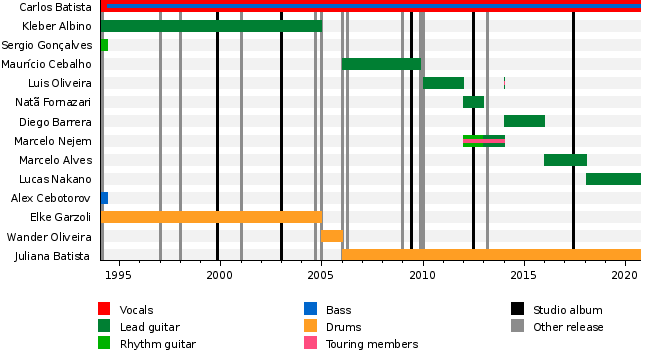 Retrieved from "https://christian-metal.fandom.com/wiki/Antidemon?oldid=1175"
Community content is available under CC-BY-SA unless otherwise noted.