Antestor are a black metal band that began in 1989 as a band named Crush Evil. The band formed out of Jessheim, Norway in Europe. The band has persevered since 1989, with Guitarist Lars Stokstad being the only remaining official member. The band's name is Latin for "Testify" or "Call to Witness".

In 1989, the band formed as Crush Evil with the lineup of Lars "Vemod" Stokstad (Guitars), Kjetil "Martyr" Molnes (Vocals), Øyvind "Hope" Haugland (Bass) and Erling "Pilgrim" Jørgensen (Guitars). Tom W. Holm Paulsen, known as Paul W., would join the band later on. Originally, the band's musical style was a mixture of death, doom and thrash metal.[1] In 1991, the band recorded their demo as Crush Evil, titled The Defeat of Satan. The band considered themselves Christians, which resulted in several death threats from the secular metal community.[2]

The existence of the band itself received much debate in the metal community. For example, two notable black metal musicians, Bård Faust of Emperor and Euronymous of Mayhem discussed the band's existence, still as Crush Evil.[3]

"Don't you think that something is terribly wrong when it has gone so far that we have a Christian "death metal" band here (Crush Evil)? Any advice on how we should kill them?"
"It's bad enough to have a couple of society bands, but a Christian band is too much. But don't worry, we have plans. They will not continue for a very long time." ― Faust and Euronymous[[source]]

However, despite these threats, the band persevered. The band was never forced apart and, ironically, Jan Axel Bloomberg, formerly of Mayhem would join the band for two albums years later.

In 1993, Vegard "Gard" Undal joined the band as the bassist and Svien Sander joining as their drummer. The band then changed their name to Antestor, which means "Call to Witness" or "Testify".[4] After the name change the band released a demo titled Despair, which was released through Strawberry Records, who pressed 600 copies.[5]

In December of 1994, the band recorded their album, titled Martyrium, with the lineup of Stokstad, Jorgensen, Molnes, Undual and Sanders. Tora also recorded session vocals on the album. Arctic Serenade Records were originally to release the album, and for unknown reasons, the album was not released until several years later. Morphine Records distributed bootleg copies of the album through the United States.

The band were in talks with Morphine about signing with the label and distributing the album, but they never signed with the label, as the man behind the label, known as David "Burrito" Villapondo, made promo tapes and sold the albums illegally 'cause he didn't have a contract'.[6] The album was the final to emphasize the death metal/doom metal style.[1]

One June 3, 1994, the band appeared on local TV program, titled "BlootlegTV" where youth could practice and experience recording and video production. During the program, the band performed 5 tracks off of Martyrium.[7] On June 6, 1995, Antestor was featured within Morgenbladet Magazine, about the phenomenon of Christian black metal or Unblack metal, heavily featuring Antestor and Horde. In the interview, Molnes stated that the band stated black metal as a style and not an ideal.[8]

In 1997, Antestor recorded a promotional CD, which was tentatively titled Kongsblod. The promo caught the attention of Cacophonous Records, one of the biggest black metal labels around which had Cradle of Filth and Dimmu Borgir in their roster.[6] The band signed for a two-album deal with the label, which released Kongsblod as The Return of the Black Death, with Joe Petagno re-designing the artwork.

Cacophonous was a heavily secular label, only signing secular bands, which included several Satanic bands. With Antestor's release of The Return of the Black Death, some interest was gained. The label signed the band because of the music, with the band informing them they were Christian.[6] Antestor were highly unhappy with their time with the label, specifically:

"I can not say they did anything else than released the album. No money, no royalties, nothing." ― Svien "Armoth" Sanders[[source]]

When asked about any changes to the album, aside from the obvious title change and artwork change, Armoth, who was being interviewed, responded:

"Nothing like that. They just said that it is not recommendable for us to proclaim exactly everywhere that we are a Christian band, and they censored the words 'Lord' and 'Jesus' from our lyrics. We ourselves removed a few texts because we did not want to provoke unnecessarily" ― Svein "Armoth" Sanders[[source]]

Despite this, the album was well-received through Christian and non-Christian black metal fans. Kerrang! Magazine and Terrorizer Magazine both gave the album a 4 out of 5 star review. Musically, the album was a mixture of black and doom metal, departing from the death metal style. Some granted the album the label of viking metal. Armoth also stated that they did not refer to themselves as black metal, stating:

"We don't even call our music black metal... We call it Atmospheric Sorrow Metal. Because that's more neutral. Then people wouldn't say, "oh, you play black metal, you are Satanists". There really is a sorrow sound, sad sound, in our music. And it's kinda cold, winterly, Nordic in a way." ― Svein "Armoth" Sanders[[source]]

By the end of 1999, Molnes departed from the band.

In 2000, Antestor signed to Endtime Productions, a label with ties to Christian black metal bands Extol and Crimson Moonlight. After Molnes' departure in 1999, the band searched for a new vocalist. Around the same time, Vaakevandring, another Christian metal band disbanded, with Ronny Hansen (Vrede) and Morten Sigmund Maegory (Sygmoon) joining the band on Vocals and Keyboards respectively. At this time, Antestor also hired Ann-Mari Edvardsen (The Third and the Mortal) for female vocals.[9] Soon after this, the band began wearing corpse paint, the signature black metal.[10]

The same year, Endtime Productions officially released Martyrium, with cover art done by Kristian Wåhlin. The next year, Antestor embarked on tour with Extol in the United States, finishing at Cornerstone Festival (July 4th Weekend).[7] The band would release their early demos - The Defeat of Satan and Despair - as one CD titled The Defeat of Satan. In 2003, Sanders departed from the band, with an official position never being replaced. They had hired Frosthardr/ex-Vaakevandring Drummer Pål "Savn" Dæhlen to fill in for dates Sanders had not been apart of, with Tony Kirkemo taking over live drums in 2003.

In 2004, the band changed their name to a more modern black metal style,[11] and released their first new songs since The Return of the Black Death in a EP titled Det tapte liv, which translated means "The Lost Life". The EP was primarily an instrumental EP. Shortly after the EP, the band released an additional album titled The Forsaken. For both releases, Jan Axel von Bloomberg, better known as Hellammer, of the secular black metal band Mayhem, a band known for their Satanic and dark themes.

"To be honest, it was a big 'f*ck off!' to them all. I will repeat again that I decide what I do and I play not only in black metal groups...In my opinion, black metal today is just music. I will tell you that neither I nor other members of Mayhem never really were against religion or something else. We are primarily interested in music" ― Jan Axel "Hellhammer" von Bloomberg[[source]]

Hansen commented on the addition of Hellhammer, stating:

"First of all Jan Axel "Hellhammer" is a total professional. He started up together with the secular scene and worse (laughs) but he doesn't care if it's secular or Christian. He knew from the start what Antestor stands for. And maybe if we get the chance, we are more than willing to use him again. Cause his drumming is outstanding. I think that he is the very best drummer in the scene and we are just very lucky to have borrowed his brilliance." ― Ronny "Vrede" Hansen[[source]]

The band asked Hellhammer to join the band for live performances as well, however he refused. Kirkemo joined the band as session member as well in 2005. The band played a few shows afterwards, before falling into a hiatus in 2007.

After three years of hiatus, on January 29, 2010, the band started a new Facebook account, announcing the new lineup - Hansen and Stokstad had remained consistent in the lineup through the hiatus - with Bassist Thor Georg Buer (Grave Declaration), Guitarist Robert Bordevik (Grievance, Vardøger) Drummer Jo Henning Børven (Grave Declaration, Morgenroede), and Keyboardist Nickolas Henriksen (Aspera). With the new lineup, the band performed a show at Nordic Fest in Olso. On November 4, 2010, the band signed to Bombworks Records and began to record a new album. While recording, Erik Normann Aanonsen (Moddi) joined the band on Bass, with Buer switching to Guitars. The album was recorded, mixed and mastered in Sweden. Buer departed from the band in 2012, to focus on his college education, before the album's release.[12] The album would be released on November 30, 2012, titled Omen.

In Early 2013, the band embarked on a Brazillian tour, which went through Belo Horizonte. During that leg of the tour, the band faced heavy protests from Black Metal/Anti-Christianity radicals who rejected them as they were a Christian black metal band.[13][14] The radicals had announced their plans online, which resulted in the police hiring a private policeman[14] and 30 security guards present.[15] At one point during the concert, an officer fired a few shots in the air to control the rioters.[13] A video was posted on YouTube with protesters shouting "F*ck you Antestor!", with the police escorting the band members.[16] After their performance, the band released a public statement about the incident, thanking their fans that supported them even though there was a risk of danger.

"We are proud to call you our brothers and sisters in Christ. Last but not least we must thank the gig securety and the Belo Horizonte police for escorting us though the angry mob. [...] We do not hate the angry mob who came to hurt us. In fact, our message in our shows is to love your enemy. So God bless everybody who stood outside chanting: F*ck Antestor! Hope we can talk like reasonable people someday over a fresh squeezed juice. Extra special hails to our fans who had the balls to come although they knew it could be dangerous. Antestor salutes you and be blessed." ― Antestor[[source]]

Soon after their return to Norway, Aanonsen was interviewed, by Norwegian Newspaper Dagen, stating that they were "twice as big in Brazil as we were before we went there".[14] On April 12, 2015, guitarist Robert Bordevik announced his departure from the band.[17] After his departure, Rolfsen returned to the band as their guitarist.[18] Bordevik would later also return to the band as their bassist.[18] 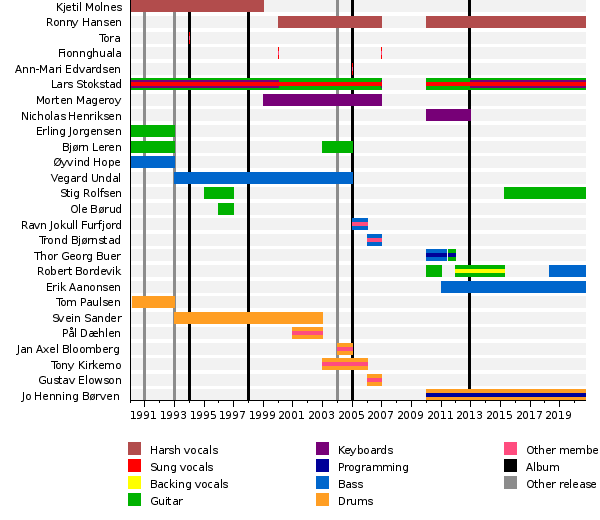 Retrieved from "https://christian-metal.fandom.com/wiki/Antestor?oldid=3066"
Community content is available under CC-BY-SA unless otherwise noted.