Aletheian was a progressive death metal band that began out of Lebanon, Pennsylvania in the United States. The band began in 1997 as the band Crutch before changing their name in 2003.

The band was signed to Burning Records, Hope Prevails Productions and eventually Ironclad Recordings, which was a subsidiary of Metal Blade Records. They released two albums and a live video.

The band went on a hiatus at some point, due to life, but founding member and Lead Guitarist Alex Kenis continued to write for the band and even has created another project, Solamors with former Drummer Travis Turner and ex-Becoming the Archetype Vocalist Jason Wisdom.

Aletheian began in 1997 under the moniker of Crutch, with the lineup of founder/Lead Guitarist Alex Kenis, Vocalist Vinnie Aldrich, Bassist Keith Isenberg, and Drummer Bryan Clarkson. In 1998, Aldrich departed from the band, with the position being taken over by Joel Thorpe. In 1998, the band released their self-titled debut studio album independently. Around April 1999, the band began to record an EP titled Transitions, which was originally titled Annealed by Animosity.[1]

Clarkson lasted until around October 1999, when Travis Turner came into the band as their new Drummer.[2] Turner's cousin, Stephen Mark Sarro (Tantrum of the Muse) set him up with the band.[3] Donny Swigart also joined on Rhythm Guitars in 1999, which solidified the lineup for years to come. In 2000, the band recorded an EP of demos titled Awe and Disbelief, with three tracks being recorded. The EP debuted Turner and Swigart. All the tracks would later go on to be on Hope Prevails, the band's next album.[4]

Hope Prevails would be released in 2001, through Burning Records, a label founded by Mike Fealko of hardcore/metalcore band Vessel. Burning Records was the band's first label, which they would be grateful for many years to come.[2] The same year, the band recorded a cover of "Breathing Murder", a song performed by Living Sacrifice who was a band that had highly influenced the band.

In 2002, Isenberg departed from the band, with Travis Wagner stepping in to fill the gap. The band would also play at MACROCK Festival that year alongside bands such as Spitfire, Fugazi, and Hopesfall.[5] At Cornerstone that year, the band were approached to be a backup band at Furnace Fest. However, due to the date, Turner stated he could no longer perform with the band, as the date of the festival, was when his twin children were born. He continued to perform with the band for a little longer.

At the beginning of 2003, the band changed their name to Aletheian. In March 2003, Turner officially departed from the band and Joe Walmer of Blind Influence joined the band as the Drummer. The band would then release their next album, Apolutrosis, that year through their label, Hope Prevails Productions. Turner had written three of the songs for Drums, with Walmer writing the rest. Wagner was there to fill-in for the band, but Kenis contributed Bass on the album.

In 2005, the band recorded and released a new album, Dying Vine, which came out through Hope Prevails and later re-released by Ironclad Recordings, a subsidiary of Metal Blade Records.[6] The same year, the band released a DVD of a live performance. 2006 saw the departure of Swigart and Kenis taking Rhythm Guitars over. During that year, however, the band toured with Becoming the Archetype and Crimson Moonlight.[7] In 2007, the band had several fill-in members, with Amulyn Corzine on Vocals, Derek Corzine of Rhythm Guitars,[8] Wagner returning on Rhythm Guitars, Andy High on Bass and eventually Chris Kenney on Rhythm Guitars and Clean Vocals. However, by 2008, Kenis, Thorpe, and Walmer were still the only remaining official members, with High on Bass and Turner returning for Cornerstone Festival, as Walmer was unable to attend.

Since this time, the band has been on an indefinite hiatus. In 2016, Kenis did an interview on the Shoot the Shred Podcast, stating that the band had all the songs for the next album written. However, they had not been able to record them, due to life happening.[9] In the same interview, Kenis somewhat stated that the band is on a hiatus.[9] 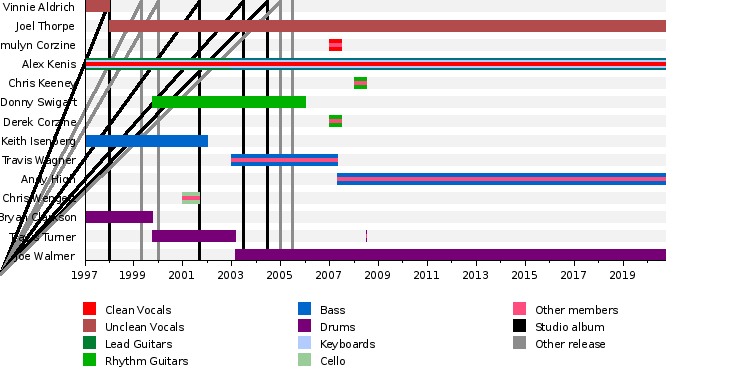 Retrieved from "https://christian-metal.fandom.com/wiki/Aletheian?oldid=1303"
Community content is available under CC-BY-SA unless otherwise noted.